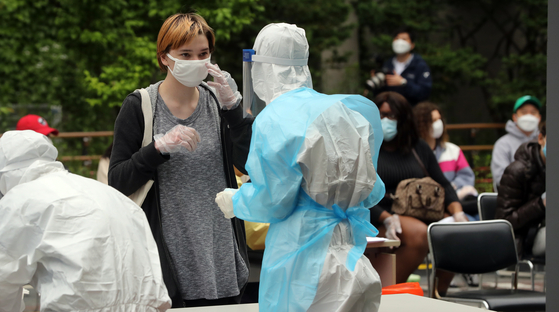 A foreign student gets tested for Covid-19 at a community health center in Seongdong District, eastern Seoul, on Tuesday after quarantine authorities revealed that 102 coronavirus cases are linked to clubs and bars in Itaewon-dong in central Seoul. [YONHAP]

At least 102 patients nationwide were linked to the coronavirus cluster in Itaewon, the multicultural hub in Seoul’s Yongsan District, as of Tuesday noon, of which nearly 30 percent are secondary transmissions.

According to the Korea Centers for Disease Control and Prevention (KCDC), 73 people have tested positive for the disease after visiting Itaewon clubs in late April or early May, while 29 were relatives, acquaintances or colleagues of those patients.

There are a total of 10,936 confirmed cases and 258 deaths, according to the KCDC. There were 27 new cases and two more deaths compared to the previous day as of noon Tuesday.

Of the 27 new patients, five were imported cases while 22 were domestic transmissions, of which 21 were linked to the Itaewon cluster in central Seoul. One case was in Daegu.

The high number of people infected by people who visited Itaewon clubs and pubs have raised concerns over secondary and tertiary transmissions, especially as the spreaders are generally healthy youngsters in their 20s and 30s. Over a third of the people who tested positive were asymptomatic.

The cluster first emerged on May 6 when a 29-year-old Korean man from Yongin, Gyeonggi, tested positive for Covid-19 after visiting five different clubs and bars in Itaewon on the night of May 1 and morning of May 2. The five establishments visited by the man, identified as Yongin Patient No. 66, from 11 p.m. to 4 a.m. were King Club, Queen, Trunk, Soho and H.I.M.

Of the Itaewon-linked cases, 92 percent of patients live in the crowded metropolitan area with 64 cases in Seoul, 23 in Gyeonggi, seven in Incheon and five in North Chungcheong. There were single cases in North Jeolla, Busan and Jeju. 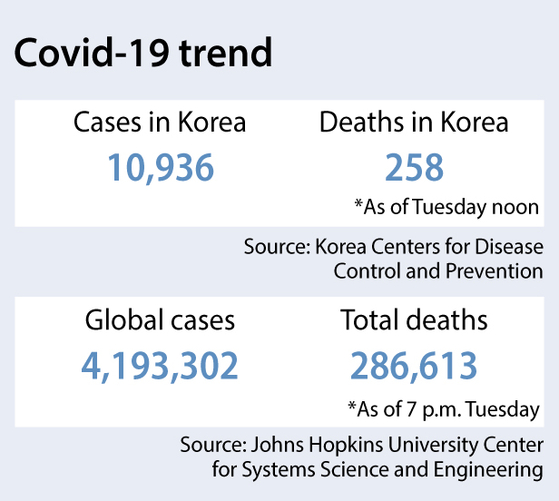 Kwon Jun-wook, deputy director-general of the KCDC, said at a briefing Tuesday, “Looking at the range of the current contact tracing, we cannot exclude the possibility of a situation of tertiary infections.”

He added, “The worst-case scenario is that there is widespread community transmission and this is discovered belatedly. We are doing our best to trace infected people as soon as possible to prevent further transmission.”

The KCDC said that it has already conducted 13,000 Covid-19 tests related to the Itaewon cluster, with most of the people voluntarily getting tested as a precautionary measure.

A 24-year-old Covid-19 patient from Bucheon, Gyeonggi, who visited an Itaewon club, infected his 54-year-old mother, and they have had contact with over 50 people, according to the Bucheon city government.

Yet despite concerns over the spread of the virus, officials are continuing to have difficulty contacting all the club goers.

The Seoul Metropolitan Government has obtained a list of 5,517 people who visited the five Itaewon clubs and bars between April 24 and May 6 and directly contacted 2,405 people so far. It has widened the search to before May 1 in case Yongin Patient No. 66 is not actually patient zero for this cluster. It is having difficultly reaching some 2,000 people. Many left false contact information in the entry logs at clubs and others may be avoiding calls from officials. Club goers may be hesitant to get tested because of social stigma — the clubs were popular with the gay community — and concerns over invasion of privacy.

To supplement the clubs' lists, quarantine officials have resorted to tracking people who visited the clubs and bars in the period through CCTV footage, credit card usage and data provided by major Korean mobile operators.

Seoul Mayor Park Won-soon said Tuesday the city has secured a list of 10,905 people who visited the five clubs and bars in that period through data provided by mobile operators. The city has also separately compiled a list of 494 people through credit card transactions.

The KCDC has advised anyone who visited or were in the proximity of clubs and bars in Itaewon from April 24 to May 6 to get tested even if they do not have any symptoms and to stay home during the possible incubation period.

Quarantine officials have also guaranteed the anonymity and privacy of individuals to encourage testing.

The Yongsan District Office said Tuesday that so far nine clubs out of 51 in the Itaewon area, or 17 percent, have confirmed coronavirus cases. Based on such figures, quarantine officials thus are tracing all Itaewon leisure spots, not just the ones frequented by Yongin Patient No. 66.

Who you gonna call?