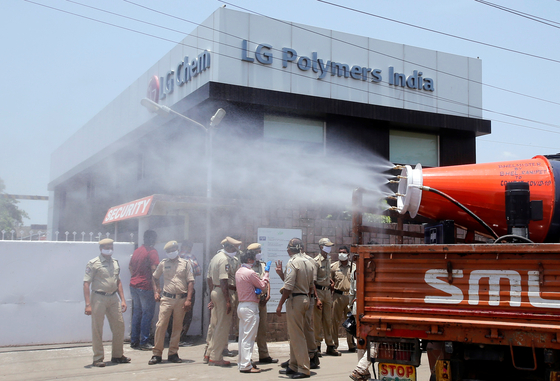 Municipal workers decontaminate the area outside of the LG Polymers plant following a gas leak at the plant in Visakhapatnam, India, on May 8. [REUTERS]


A team of engineers and safety experts from LG Chem left Korea Wednesday morning, en route to the site of a gas leak at a company-owned factory in Visakhapatnam, India, that killed 12 locals and hospitalized nearly a thousand last week.

The team is tasked with re-evaluating the factory’s safety, determining the cause of the leak and coming up with a support plan for the damage caused to the local community. The factory is operated by LG Polymers, a wholly-owned subsidiary of LG Chem.

Company vice president Noh Kug-lae, who heads the firm’s petrochemical business unit, is leading the team. Vice Chairman and CEO Shin Hak-cheol, who was rumored to also be planning a visit to the site, will remain in Seoul but will “continue handling the situation as the head of the emergency committee,” LG said in a statement.

“As team leader, Noh will meet in person with the affected locals, explain our support plans and conduct meetings with government officials,” the company said.

The care package for each individual was not yet set in detail but will be further discussed once the team arrives on site, according to LG spokesman Choi Sang-gyu.

Choi said transportation issues related to the pandemic were the reason it took the company a week to dispatch the team to the site. Both India and Korea require extensive quarantines for travelers moving between the two countries, but the two governments worked together to create an exception for the LG Chem employees.

On May 7, the LG Polymers plant in Visakhapatnam leaked a cloud of styrene, a toxic gas that can be fatal in high doses. The chemical is the base ingredient for polystyrene, the factory’s main product. The Korean company acquired the plant from Hindustan Polymers in 1996.

The company has not yet determined whether it will reopen the plant, Choi said.

Earlier this week, Indian authorities ordered the plant’s remaining 13,000 tons of styrene monomer to be transported outside the country. According to Indian news outlets, the first batch of 8,000 tons was shipped to Korea Tuesday night. LG is preparing to ship the rest back this week, Choi said.

The Indian government last week ordered a probe to investigate whether the gas leakage was the result of negligence. The leak occurred shortly after the factory began restarting operations following nearly 45 days of lockdown due to the Covid-19 outbreak in India.

News outlets in India and elsewhere have reported that LG expanded operations five times between 2006 and 2018 without first obtaining environmental clearances to do so.

Choi denied the accusation, saying they were not “facility expansions but increases of production within the same production capacity,” which it did report to local authorities.

LG had, however, filed for an environmental clearance in 2018, which was left pending for review at India’s Environment Ministry until the recent accident occurred. But Choi said LG Chem believed it was in compliance at the time, and its application was only in response to government guidance on changes to the law.

Indian authorities on May 8 filed homicide charges against LG Polymers in connection to the gas leak.