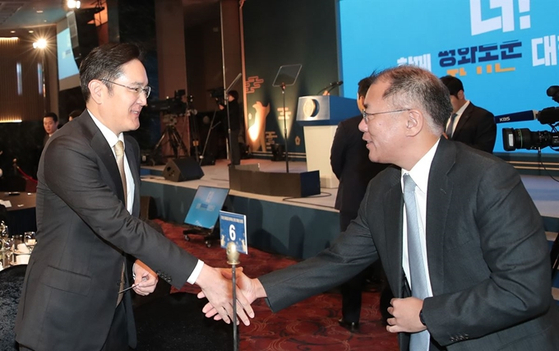 
Samsung SDI might start supplying a yet-to-be-developed rechargeable electric vehicle (EV) battery to Hyundai Motor in the future. If the deal is actually achieved, it would significantly change the dynamics of the brutally-competitive car battery market.

It was their first formal meeting ever.

Samsung SDI is a manufacturer of batteries and components for solar power plants and displays. Samsung Electronics owns 19.58 percent of the company.

Hyundai Motor currently has no supply agreement with Samsung SDI for EV batteries.

A source at Samsung Electronics who requested anonymity said that it is premature to say whether a deal will be signed.

“Today’s event is designed to introduce the technological state of Samsung’s all-solid-state batteries, and the two leaders discussed areas of mutual interest,” the source said, “We can say possibilities are open, but it is too early to say some kind of agreement is underway.”

All-solid-state batteries are next-generation rechargeable batteries and have yet to be commercialized. Unlike lithium-ion batteries, which are the main product used in today’s electric vehicles and are inflammable, batteries with solid electrolytes are considered safer and are a better store of energy.

With the promise of the all-solid-state battery, Samsung is focused on getting an upper hand in the research and development (R&D) of the product.

Samsung Advanced Institute of Technology (SAIT), which is run by Samsung Electronics, announced in March that it published research on high-performing all-solid-state batteries in Nature Energy, a prominent scientific journal.

In the paper, the team discussed the development of a model battery that would power a vehicle up to 800 kilometers (497 miles) on a single charge and be good for over a thousand charges, according to a statement released by Samsung Electronics.

The existing battery supplier for Hyundai is LG Chem, while Kia Motors buys from SK Innovation. Samsung SDI's main client is BMW, and the battery maker is scheduled to supply its new lithium-ion batteries next year for the German carmaker under a $3.2 billion deal announced last year.

The Wednesday meeting was the first public appearance of Lee since apologizing for past wrongdoings last week.