Zero Pay goes from zero to hero in Covid-19 outbreak

Zero Pay goes from zero to hero in Covid-19 outbreak

In late March when Gu Bon-hyun heard news that the Seoul Metropolitan Government was selling special coupons at a 15 percent discount to help small businesses hit by the Covid-19 pandemic in Seoul, he was all ears.

The 31-year-old graduate school student in Gwanak District, southern Seoul, was intent to save anything he could from the humble paycheck he was receiving from his lab.

Late March was when Korea’s central government kicked off its so-called high-intensity social distancing campaign to urge people not to leave their homes in fear of Covid-19 infection, but the guidelines were taking a serious toll on small businesses and mom-and-pop stores that relied on locals regulars.

In cooperation with several district government offices in the capital, the Seoul government decided to give those stores a boost by selling 50 billion won ($40.7 million) worth of “Seoul Love Coupons” to Seoul citizens at a 15 percent discount that offered them 5 percent savings on their purchases at the city’s small businesses to raise sales. The discount rate was more than double what is was before the pandemic, 7 percent.

The Seoul Love Coupons could only be used at member stores of “Zero Pay,” a special mobile payment service integrated in commercial banking and payment apps.

The Seoul government launched the service in late 2018 to help small retailers across the nation by reducing their transaction fees levied by credit card companies and banks to nearly zero, where the “zero” in Zero Pay derives from. Zero Pay users, in turn, were promised a 30 percent tax deduction.

A pet project of Seoul Mayor Park Won-soon, a former human rights lawyer with alleged presidential ambitions, Zero Pay had been promoted by the Seoul government with much fanfare last year, but met a lukewarm reaction from the public. 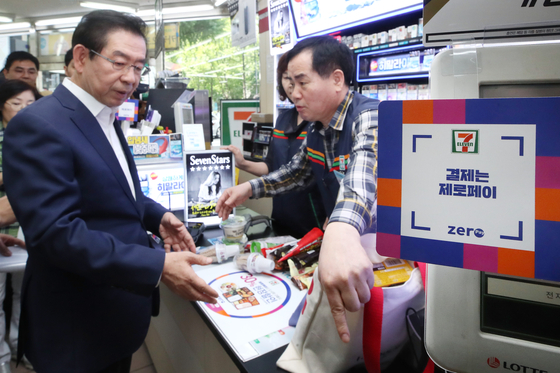 The tax deduction rate was higher than that of credit cards, about 15 percent, but about the same as check cards and debit cards, which barely offered any merit for consumers to switch to the new payment system.

On the part of the mom-and-pop store owners, their transaction fees had already been downed to nearly zero due to government pressure on card issuers, which barely gave them any reason to persuade customers to use Zero Pay and go through the hassle of training themselves and their part-timers on the new system.

The number of users was so meager last year that critics joked the program was called Zero Pay because there were zero users.

But this year the tide has turned with the advent of the coronavirus.

Last month, the Seoul government also doled out Covid-19 relief payments to the mid- and low-income bracket through Seoul Love Coupons, giving people the option to choose between 330,000 won worth of the coupons or a prepaid card loaded with 300,000 won. Nearly 130,000 people, or about 40 percent of the beneficiaries, opted to receive the Seoul Love Coupons, which led to more Zero Pay users.

As more local government offices across the nation follow in the footsteps of Seoul by offering their versions of Love Coupons to their constituents, and require the coupons be used through Zero Pay, the number of Zero Pay payments and Zero Pay store members has skyrocketed over the past several weeks. 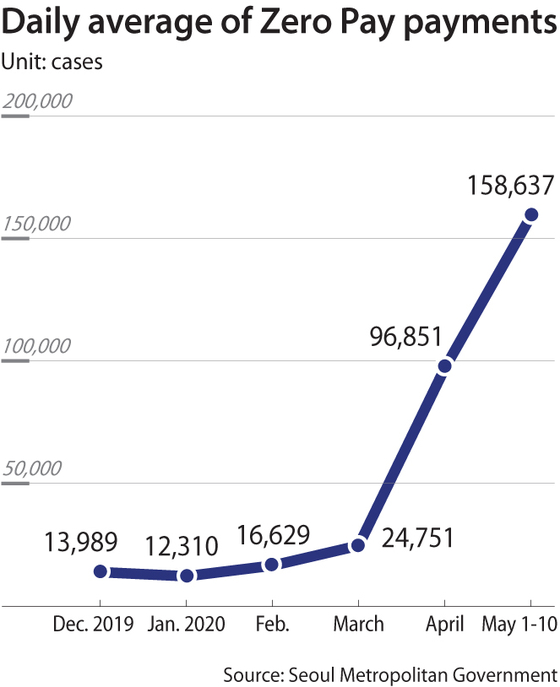 By Sunday, 502,810 nationwide stores were Zero Pay members, about 45 percent of which were in Seoul.

Gu, the graduate school student, said he purchased Seoul Love Coupons when the Seoul government rolled out 50 billion won worth of it last March upon realizing that many of the restaurants and convenience stores he had been frequently visiting were Zero Pay stores. Non-small business owners can apply for Zero Pay store memberships, but the zero transaction fee policy is only applied to stores whose annual sales are 800 million won or less.

Sometimes store owners refuse to receive payments in Zero Pay, he said, claiming they don’t know how to process their payments or haven’t received the necessary equipment to do so from their district government office.

“I think Zero Pay bar codes don’t read well, either,” Gu complained. “When I go to a CU convenience store, it takes way longer for their device to read my Zero Pay bar code compared to other payment apps, like 10 seconds on average and sometimes longer than a minute. It’s okay when there’s no other customer inside, but one time I had a line of people waiting behind me so I just paid with my card."

Customers normally scan a store’s Zero Pay QR code with their smartphones to make transactions, but in larger stores or chains that have scanning devices, transactions can also be made by a different yet similar process involving bar codes.

A Seoul government official Tuesday conceded receiving similar complaints recently as more people start to use Zero Pay, saying some Zero Pay store owners had ditched their QR codes or claim they don’t know how to process Zero Pay transactions because it was only after the Covid-19 pandemic that people began using the service.

“The operator of the Zero Pay service is the Korea Financial Telecommunications & Clearings Institute, and each local government office has their own so-called Zero Pay coordinator, so they’re teaming to visit Zero Pay stores to teach the sellers how to use the program,” the Seoul official replied, when asked how the Seoul authorities were handling the complaints.

The official continued that a report system through which consumers can file complaints about slacking stores will also launch soon so that Seoul officials and the Korea Financial Telecommunications & Clearings Institute can convince Zero Pay member stores to either abide by Zero Pay guidelines or have their memberships revoked.

Gu says he’s willing to use Zero Pay as long as he can get at least a 10 percent discount on the Seoul Love Coupons.

But without the discounts?

“There’s not a single reason to use Zero Pay.”