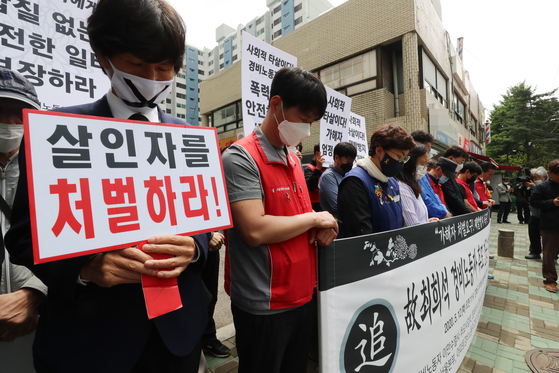 Civic group members hold a vigil Tuesday to mourn a security guard who took his own life after being subject to alleged physical and verbal abuse by an apartment resident. [YONHAP]


Another nasty case of “gapjil,” or abuse of position, is provoking public ire in Korea, this one involving an apartment security guard who committed suicide Sunday after being repeatedly abused by a resident.

The guard, identified only by his surname Choi, worked at an apartment complex in Gangbuk District, northern Seoul, where he was well-liked by residents for his polite demeanor and industriousness.

They were surprised to learn that Choi, 59, chose to take his own life — and even more shocked to discover he had left behind a note revealing he had been subject to continuous beatings and insults from one resident, an entertainment producer with the surname Shim.

According to the victim’s brother, who conducted a radio interview with Christian Broadcasting System on Wednesday, the abuse began on April 21 in the outdoor parking lot of the apartment complex.

One of Choi’s main jobs as a guard was to manage traffic congestion in the parking lot to help residents enter and leave with their cars.

When Choi tried to push Shim’s parked car to make space for another, Shim apparently had a fit of rage. He forced Choi to return his car to its original place, according to his brother, and then dragged him to the apartment manager’s office where Shim berated him as a “servant” and told him to quit.

The term servant — meoseum in Korean — was repeatedly used by Shim to belittle Choi on later occasions, according to his brother, and Shim harangued him almost every other day to quit.

On April 27, Shim allegedly forced his way into a bathroom Choi was using and physically beat him, breaking his nose. Choi’s brother said he believed Shim used that situation to hit Choi because there was no surveillance camera in the bathroom.

Shim’s abuse, however, turned even more devious after this incident. He sent a text message to Choi that suggested Choi’s brother, not he himself, was responsible for breaking Choi’s nose, apparently with the intent to use the message as evidence in a legal battle.

Shim further claimed that he was the one who had been beaten by Choi and demanded 20 million won ($16,000) in damages from Choi.

Under immense pressure, the security guard filed a physical abuse complaint with the police against Shim. Several residents who heard about the case volunteered to help Choi find a lawyer.

They succeeded, but the lawyer had to resign from the case due to the coronavirus outbreak, Choi’s brother said, leaving Choi devastated. He attempted to jump off the apartment’s roof on May 4, but residents were able to stop him.

Choi was found dead near his home early Sunday morning a day before he was due to be interviewed by police about his criminal complaint against Shim.

The case gained national attention on Monday, when another resident of the apartment complex posted a petition on the Blue House website calling for justice for Choi and punishment for his abuser. The petition received more than 300,000 signatures by Wednesday afternoon.

A civic group fighting for the rights of lower-income citizens filed further criminal complaints against Shim.

The Gangbuk Police Precinct on Monday banned Shim from leaving the country and said it was considering filing a warrant for his arrest this week. Shim denied he hit Choi and claimed residents were exaggerating the extent of his actions.

Choi’s death, however, is just the latest in a string of cases involving the abuse of apartment security guards by the residents they are supposed to be keeping safe. In November 2018, a security guard in Seodaemun District, western Seoul, died after being beaten by a drunk resident.

According to a survey of 272 apartment workers by the Korea Research Institute of Housing Management, a private think tank, around 26.5 percent responded they were subjected to unfair treatment by residents.

The Korean Confederation of Trade Unions, one of Korea’s largest workers’ unions, and a collection of leftist political parties on Tuesday held a vigil for Choi, who they said was the victim of “not individual desperation, but a murder by society.”

Due to the frequency of such cases, the government in 2017 revised the public housing law to prevent residents from making excessive demands on workers.

Excessive guarding of the president

Excessive guarding of the president (KOR)