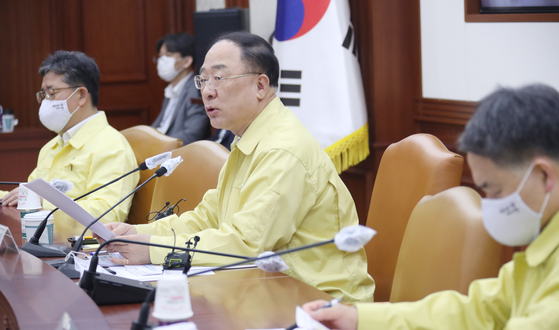 
Finance Minister Hong Nam-ki on Thursday said the government will focus on creating 1.56 million jobs, especially in the public sector, to counter the massive job losses due to the coronavirus pandemic.

In meeting its goal, the minister said the hiring of 48,000 government and government-owned institution employees and public companies employees starting this month will be accelerated.

As of April, the government had already hired 19,000 people. It noted that many of the hires earlier this year have been postponed in order to allow for the practicing of social distancing and to prevent the spread of the contagious virus.

Hong added that the government will resume this month adding 945,000 public sector jobs, such as those related to the welfare of and services for those who are vulnerable, including the elderly, people with disabilities and low-income households. The process had been suspended due to the coronavirus.

The minister said roughly 600,000 of these jobs will be those that will have little or no face-to-face contact or are outdoors.

These are in addition to the 550,000 or more jobs that the government has promised under the banner of the “Korean New Deal” in late April during the emergency economic council meeting headed by President Moon Jae-in.

The Korean New Deal targets creating 100,000 non-contact digital jobs in the public sector, such as public database input as well as 50,000 jobs in the private sector through a payroll subsidy.

Hong said the government will spend an additional 12 trillion won ($9.8 billion) through the third supplementary budget on top of the 25.5 trillion won budget for this year on jobs.

“As we have expected, the job situation in April has become worse than in March as economic activity slowed due to the coronavirus shock,” said Finance Minister Hong during an economic emergency council meeting. “The decline of vulnerable jobs, especially temporary and day labor positions, is becoming notable. While for now the impact is centered largely on the service industry, it is showing signs of transferring to the manufacturing industry steadily.”

On Wednesday Statistics Korea announced the worst job report in two decades as 476,000 positions were lost compared to the year earlier, down 1.8 percent year-on-year. It was the largest job loss since February 1999, when 658,000 positions were wiped out.

Hong said the government’s four major goals in relation to jobs is securing existing jobs through job stability, helping those who have lost their jobs due to the coronavirus through unemployment benefits, providing support for those who are in unemployment insurance blind spots and creating jobs.

In regard to the public jobs only being temporary and not self-sustaining, the minister said it is the private sector that should ultimately be in charge of maintaining and creating jobs.

“[The government] will focus on boosting the domestic market, vitalizing investment, lifting regulations and resolving management obstacles so that the private sector will continue to create jobs,” Hong said.

During the meeting, Hong also raised the need for changes to the employment safety net and the work system.

“Improvement in the employment safety net of those in the vulnerable positions, including people in special job types, freelancers, temporary and day laborer, who have been directly hit by the coronavirus situation, is urgent,” Hong said. “Additionally we are in need of a new flexible working system such as remote work.”