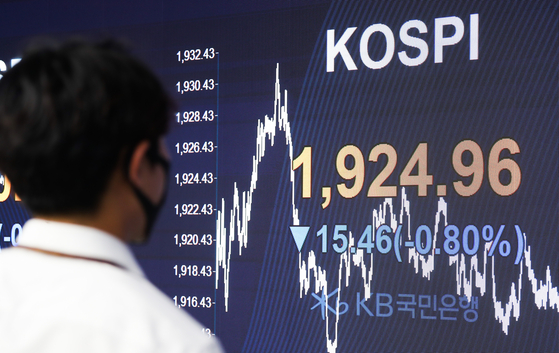 The screen in the dealing room of Hana Bank in Jung-district, central Seoul shows the benchmark Kospi for May 14. [YONHAP]


Stocks closed lower Thursday as investor sentiment was dented by a grim forecast for global economic recovery amid the novel coronavirus pandemic. The won fell against the dollar.

The index never moved above the flatline throughout the session.

Growing concerns over renewed trade tensions between the United States and China also weighed down the local market, analysts added.

"Powell's comments were not helpful since it can lead to continued foreign sell-offs here," Seo Sang-young, an analyst at Kiwoom Securities, said.

Foreigners dumped a net 552 billion won, while institutions sold a net 238 billion won worth of local stocks. Individuals scooped up a net 785 billion won on the Seoul bourse.

Earnings prospects lifts Kospi for second day in a row