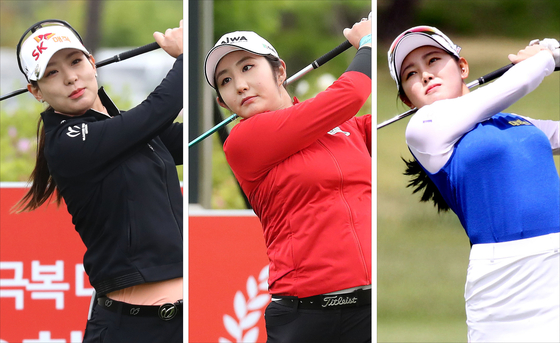 From left: Kim Char-young, Bae Seon-woo and Hyun Se-lin watch their shots during the first round of the 42nd LPGA Championship at the Lakewood Country Club in Yangju, Gyeonggi, on Thursday. [NEWS1/KLPGA]

The KLPGA Tour season has finally restarted with a major tournament, the 42nd KLPGA Championship, at the Lakewood Country Club in Yangju, Gyeonggi, on Thursday.

After quite a competitive first round, three players — Bae Seon-woo, Kim Char-young and Hyun Se-lin — are tied for the lead by shooting five under par, 67.

Bae had a clean scorecard by playing a bogey-free round with just five birdies. She picked up her first birdie of the day on the par-4 fourth and another on the par-4 eighth. Then, once she got to the back nine, she added three more to take the lead.

While Bae had a clean sheet on the first round, Kim didn’t get off to the best start. She had a rough first three holes, where she started off with a bogey on the par-5 first and a birdie to make up for the bogey on the par-3 second. Then, she once again evened the score by adding another bogey on the par-4 third. However, things started to change with another birdie on the par-4 fourth.

In the front nine, Kim added two more birdies on the sixth and seventh holes, and just like Bae, Kim, too, added three more birdies to finish her round at five under par.

Hyun was the last player to join the top of the leaderboard. With six birdies and a bogey, her round was good enough to set her off to a strong start.

The defending champion Choi Hye-jin added three birdies and an eagle, on the par-5 seventh, but a double-bogey on the par-5 15th dropped her down to tied for seventh at three under par in the first round. Jang Ha-na, who won the 40th KLPGA Championship, shot a round of even par, 72, to be tied for 38th.

The World No. 3 Park Sung-hyun and the World No. 10 had a slow start tying for 59th by shooting one over par, 73, on Thursday. For Park, this is her very first tournament of the season. World No. 6 Kim Sei-young also struggled in her first round as she is tied for 83rd by shooting two over par, 74.

This is the first KLPGA tournament of the 2019-20 season that’s being held in Korea. Due to the coronavirus pandemic, the KLPGA also had to pause their season after the opener in Vietnam back in December last year.

Since the LPGA Tour hasn’t made any announcement regarding the re-start of the 2019 season, the Korean tournament made headlines even weeks before it started as a number of LPGA Tour players announced their decision to compete in it.

But its not only LPGA Tour players competing — some Korean golfers on the Japanese Tour are also playing this weekend.

This year’s KLPGA Championship has the highest purse in the history of the tournament, at 3 billion won ($2.4 million). Of that total, the champion will pocket prize money of 220 million won.

In addition to the increased purse, the field also expanded from 144 to 150 players.

Despite the season finally resuming, just like the baseball and football leagues in Korea, the KLPGA started the tournament without any fans. However, having no fans isn’t expected to affect the players too much compared to the other sports that rely more on the atmosphere created by a cheering audience.

The players and their caddies also appeared to be taking extra precaution as they were spotted wearing masks on the course. While the majority of players only wore masks during their warm-up sessions and took them off when they teed off, all the caddies wore masks throughout the first round.