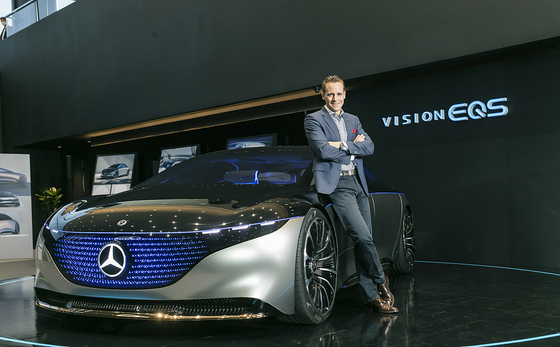 
The company said that the vehicle is an electric equivalent of the S-Class, its top-of-the-line internal combustion sedan. It arrived in Korea last week after traveling to a couple of Asian countries, including China and Japan, after being world premiered at the Frankfurt Motor Show last year.

Mercedes offered few details about the car. No timeline was given for production and availability, and visitors were not able to look under the hood.

“The Vision EQS perfectly embodies Mercedes-Benz’s design philosophy which is progressive luxury,” said Mark Raine, vice president of the product and marketing team at the Korean unit of Mercedes-Benz, at an unveiling event held at its newest showroom in Goyang, Gyeonggi.

“It is our interpretation of progressive luxury coupled with timeless elegance.”

The grille of the Vision EQS is a black panel decorated with 188 LED lights and Mercedes star logos.

The headlamps are extremely slim digital lights that barely seem capable of illuminating the road ahead. They are incorporated into what’s called a light belt, which wraps around the car’s exterior.

Mercedes said the interior was inspired by a luxury yacht. The dashboard has a large digital screen that extends into a center console then to an armrest, giving it a sort of sci-fi vibe.

The company said the car will be able to hit 100 kilometers (62 miles) an hour in 4.5 seconds. It will also be able to drive up to 700 kilometers on a single charge, much farther than competitor models. The Tesla Model S has a 487-kilometer range, and the electric Kona SUV from Hyundai Motor can go 406 kilometers.

The model will be equipped with Level 3 autonomous driving technology, where a driver can take their eyes off the road under some circumstances.

Mercedes brings the Vision EQS concept car into a highly-competitive local market, and even if it makes good on all its promises, it has a challenging road ahead.

Its first EQ lineup — the EQC, a compact SUV — which was available in Korea last September sold poorly despite a strong market for electric-powered vehicles. In the first quarter of this year, Mercedes-Benz Korea sold 13 units of EQCs.

EVs are great unless you make auto parts