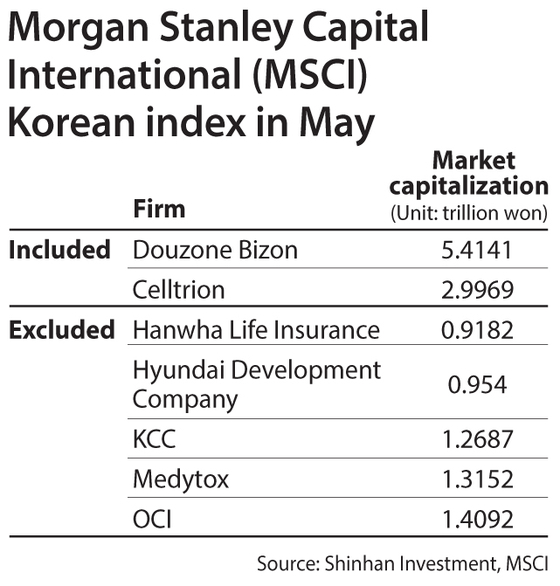 The rebalanced Korean index will take effect after the Kospi and Kosdaq markets close on May 29.

Hanjin KAL, the parent company of Hanjin Group, failed to rejoin the MSCI index. Amid disputes over management rights, the company’s market cap surged with its stock price, rising 128 percent from 39,950 won ($32.54) since the beginning of the year to 91,500 won as of May 12. The small number of shares traded in the market seems to have played a role in its failure to be included in the MSCI index.

“China's share in the MSCI Emerging Market Index has increased from 40.5 percent to 41.5 percent, while Korea's portion has decreased from 12.9 percent to 12.6 percent," Kang Song-cheol, an analyst at Shinhan Investment, said. "I expect net selling of Korean stocks once the MSCI index goes into effect."

The announcement appeared to have an effect in the stock market. Newly added firms finished in positive terrain on Wednesday and Thursday. Celltrion rose 0.93 percent and Douzone Bizon added 0.47 percent from the previous session’s close on Thursday. Hanjin KAL lost 0.75 percent and Medytox fell 7.87 percent, extending losses from Wednesday.