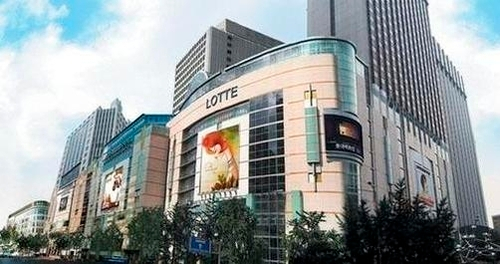 
Lotte Shopping announced a net loss of 43.33 billion won ($35.3 million) in the first quarter, down sharply from a 109 billion won net profit during the same period last year.

The company's performance was announced two days after Shinsegae blamed the same dire business environment on its reported 97 percent drop in operating profit.

The company declined to provide its net earnings for its subsidiaries.

Lotte Shopping, however, said it expects its performance to improve as sales of television, computers and laptops rise as more people seek modes of communication that preclude person-to-person contact.

Sales at Lotte Super inched up 3.6 percent on year to 491.3 billion won, but it posted an operating loss of 6.3 billion won.

The company's home shopping unit, however, saw increases in both sales and operating profit given the recent surge in popularity of health care products. Its operating profit jumped 10.6 percent to 36.7 billion won on 269 billion won sales, which were up 16 percent compared to the same period last year.

“Retailers in Korea suffered major difficulties in the first quarter with the spread of coronavirus that led people to avoid crowded locations and decreased their spending,” a spokesperson for Lotte Shopping said in a statement. “Lotte Shopping plans to continuously strengthen its e-commerce working environment via Lotte Shoppings’ integrated online platform Lotte On.”