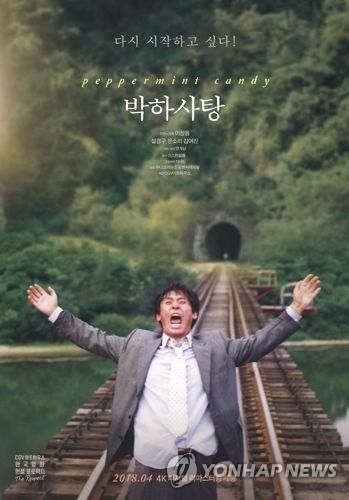 "Peppermint Candy" (1999) is among movies about the May 18 movement that will be screened at the Asia Culture Center and Asia Culture Institute in Gwangju through next week. [YONHAP]

The Asia Culture Center and the Asia Culture Institute in Gwangju will be screening movies about the May 18 movement from Friday to May 24, in collaboration with Korean Film Archive.

The two cultural centers will be screening 18 films about the movement, including “Song of Rebirth” (1990), “O Dreamland” (1989), “A Petal” (1996) and “Peppermint Candy” (1999), as well as a Japanese documentary about the movement, “Free Gwangju” (translation), which has never been screened in Korea since its production in 1981.

The films have been provided by the Korean Film Archive, which is also running some 20 films about the movement from May 16 to 24 at its headquarters in western Seoul.

The two institutes in Gwangju will also be hosting discussions with some directors of the films.

The screenings are free but require advance reservation online on the website of the Asia Culture Center. They will be screened up to twice a day, each with less than 40 people. No English subtitles will be provided.

This year is the 40th anniversary of the May 18 movement, which took place from May 18 to 27, 1980, when thousands of citizens joined a public uprising in the southwestern city of Gwangju to protest Chun Doo Hwan’s seizure of power in a military coup five months earlier. Chun’s military junta deployed troops to the city in a brutal crackdown that resulted in at least 193 dead by official count.