Infections in the Itaewon cluster reached 133 by Thursday noon, up by 14 from Wednesday noon.

All four neighborhoods are known for clubs and bars. Many infections from Itaewon-dong in Yongsan District, central Seoul, were traced to clubs and bars that cater to the LGBTQ community.

Officials said Thursday that it appears three foreigners who partied at clubs in Itaewon on May 2 and 3 may have spread the disease to another club in Sinchon-dong of Seodaemun District, western Seoul, near Yonsei University.

Na Baek-joo, director of public health care management at the Seoul Metropolitan Government, said in a press briefing that a Korean man in his 20s who lives in Seoul was infected recently after visiting Damotori5, a club in Sinchon, and that his infection seems to be connected to the foreigners, one American in his 20s, and two French men, one in his 20s and one in his teens.

Na said 199 people were found to have visited Damotori5 around the same time, and they have all been contacted by officials and told to self-quarantine.

According to details of the foreigners’ movements disclosed by the Yongsan District Office and the Seodaemun District Office, they partied at Itaewon’s King Club and Queen on May 2 from 12 to 7 a.m. That’s roughly when one of the Itaewon cluster’s initial spreaders of the virus visited, a 29-year-old Korean man living in Yongin, Gyeonggi.

Other than those two establishments, the Yongin man also visited Soho, Trunk and H.I.M, all in Itaewon, between 11 p.m. on May 1 and 4 a.m. on May 2. Four other clubs and bars in Itaewon that were visited by Covid-19 patients recently were Pink Elephant, Fountain, Made and Pistil.

The French teen and American stayed home on May 6, but the French man in his 20s went to a Belgian beer pub in Itaewon, Bel.G, and stayed from 8:30 to 10 p.m.

They all tested positive for the coronavirus on May 8.

Na said officials were also looking into the Hongdae neighborhood in Mapo District, western Seoul, as a new hot spot after some infections were traced to Hansin Pocha and 1943 near Hongik University Station, both of which are a type of pocha that sells Korean street food and liquor. That type of business normally doesn’t involve dancing like clubs and some bars.

Officials don’t know for sure yet whether the Hongdae hot spot is linked to the Itaewon hot spot.

Na said Thursday in the press briefing that a Korean man in his 20s visited Hansin Pocha and 1943 on the night of May 7 with five friends, and he and four of the friends have tested positive. Further contract tracing was needed to figure out whether the pocha were the epicenter of the virus, Na said.

The official continued that many people appeared to have gone to Nagwon-dong after partying at Itaewon clubs, which is why authorities are keeping a close watch on that area, though no place appears to pose a serious risk of Covid-19 infection yet.

Officials are urging anyone who went to a bar or club in Itaewon from April 24 to May 6 to get tested as soon as possible, reassuring people of the LGBTQ community their names will be withheld. 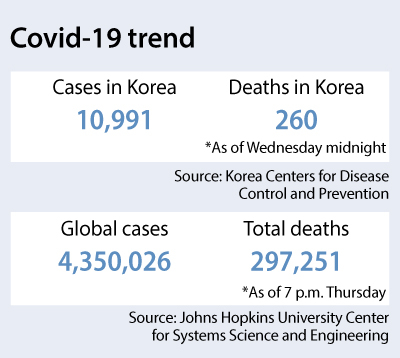 Among 133 people who have been traced to the Itaewon cluster by Thursday noon, 82 got infected after visiting Itaewon clubs and bars, while the rest were people who came into contact with the 82, including friends, relatives and colleagues.

Seventy-three people live in Seoul, 25 in the surrounding province of Gyeonggi, 18 in Incheon, eight in North Chungcheong, four in Busan and one each in South Chungcheong, North Jeolla, South Gyeongsang, Gangwon and Jeju Island.

Twenty-one people are female and the rest are male.

In terms of Korea’s daily infections, the Korea Centers for Disease Control and Prevention (KCDC) announced that 29 people tested positive for Covid-19 Wednesday, three of whom represented imported cases. Of the 26 domestic cases, 20 were connected to the Itaewon cluster.

By Wednesday midnight, 260 people had died, up by one from the previous day, while 9,762 people have been declared fully recovered, up by 67 from the day before.

Of Korea’s total 10,991 patients, 1,145, about 10.4 percent, contracted the coronavirus while overseas, KCDC data showed, mostly from the United States or Europe.

The Korean central government’s Covid-19 command center said Thursday that 35,000 virus tests have been administered so far in connection to the Itaewon cluster, of which 15,000 were carried out Wednesday.

Officials have been tracking partygoers in Itaewon based on lists of visitors that clubs and bars compiled between late April and early May in compliance with government health guidelines, which include names and phone numbers. Noting that nearly half of the people on the list weren’t picking up their phones or had submitted fake numbers, officials have also been using credit card transactions and access logs from nearby phone base stations.

The Covid-19 command center said that if people don’t follow orders from their local government office to get tested, they could be fined 2 million won ($1,630).

Infections traced to a 25-year-old Korean hagwon (cram school) instructor in Yonghyeon-dong, Michuhol District in Incheon, who visited King Club in Itaewon early this month, also rose to 14 Thursday, three more than the day before.

The three added cases were a high school student at the hagwon, the student’s mother and his friend. The latter two didn’t have any contact with the instructor.

Education officials Thursday said they had no intention at this point to further delay the dates for reopening schools but mentioned they were continuously tracking down students and teachers who visited Itaewon recently. No school teacher, including foreigners, have tested positive for Covid-19 so far, Vice Education Minister Park Baeg-beom said in a press briefing.