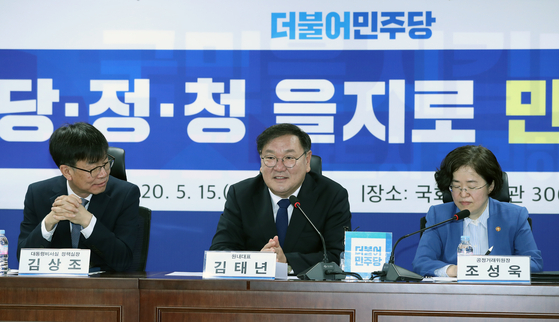 
As part of a push that began well before the coronavirus outbreak, the government on Friday announced a raft of policies to create a more fair economy for small businesses and their employees, including new injury compensation coverage for workers, protections for franchisees and economic relief aimed at alleyway businesses.

On Friday the government, Blue House and the ruling Democratic Party announced they had agreed on the fair economy improvement plans that focuses on supporting self-employed workers and consumers affected by the coronavirus pandemic.

According to the government, areas in which restaurants are densely clustered will be designated as “alleyway-type commercial districts.” Those districts will be eligible for targeted government support that has until now been limited to traditional markets. The supports range from consulting, marketing and improving facilities such as building parking lots in those areas.

The government defines alleyway-type commercial districts as areas that have 30 or more stores — restaurants or other businesses — crammed into a 2,000-square-meter (21,528-square-foot) area.

Previously, government support measures were limited to commercial districts in which at least half of the businesses were wholesale or retail, a policy that precluded restaurant-heavy neighborhoods.

As part of its fair economy push, the government also plans to put teeth in an existing law that provides protections for small businesses by prohibiting large companies from entering certain sectors, like tofu manufacturing, bookstores and vending machine management.

The government said it will soon establish penalties for large companies that do not remove themselves from those exclusively small business areas.

Franchisees were also included in the new protections announced Friday.

Standard contracts between franchisees and franchise owners were established by the government in recent years in response to franchisees getting trapped in predatory contracts in which the parent companies were accused of unfairly jacking up the prices.

To create more specificity in the contracts, the government is expanding the number of standard contracts from four to 11.

Starting in 2021, workers' compensation will also extend to freelance software developers and other IT workers, deliverymen and people who take care of elderly people and young children, known as dolbom service providers.

The government also announced it would introduce dispute resolution standards in an effort to shore up consumer protections.

Under the plan, customers will have the right to demand refunds after overseas trips, flight tickets and event bookings are canceled due to contagious disease outbreaks.

The dispute resolution standards are scheduled to be released in the first quarter of 2021.

Under current law, customers only have those protections in the event of a natural disaster.

Since the coronavirus outbreak emerged, many people have canceled their trips abroad or postponed weddings. But travel agencies and wedding hall venues have denied refunds and in some cases charged cancellation fees.

“It is a fact that Covid-19 has socially and economically affected all businesses and consumers,” said Joh Sung-wook, the chairwoman of the Fair Trade Commission. “However, the level of damage or the impacts on livelihoods is more severe [to small businesses and the self-employed.]”

Joh said the most important issue at hand is to set up an economic and social safety net to resolve structural problems that can’t be solved with direct support.

“While [we’re in] an economic crisis where everyone struggles, policies that would help the economically vulnerable to overcome Covid-19 is especially important,” Joh said.

She said the government will increase its protection and support for those small businesses.

“This plan will not only resolve unfairness but is also meaningful as a pre-emptive action in the post-coronavirus [era],” said Park Hong-keun, a Democratic Party lawmaker.