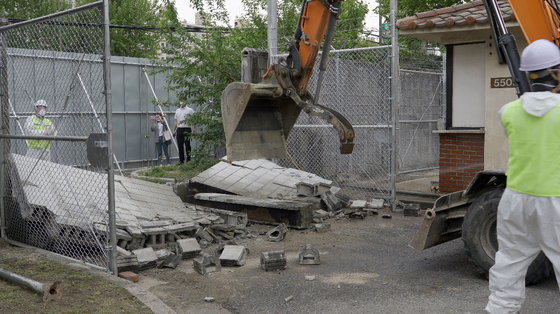 Walls of the U.S. military officers' quarters at the former U.S. Army base in Yongsan District, central Seoul, are being demolished by a wrecking crew on Thursday. [MINISTRY OF LAND, INFRASTRUCTURE AND TRANSPORT]

The walls of the former U.S. Army base in Yongsan District are starting to come down.

According to the Ministry of Land, Infrastructure and Transport on Friday, a 15-meter (49-foot) section of the walls around former U.S. officers’ quarters was demolished Thursday, the first step in opening that area to the public.

The wall came down to allow trucks to enter for construction and redevelopment.

The lease ended at the end of last year.

The officers’ quarters will be redeveloped into a park, some of which will be opened in the second half of this year.

Parts of the quarters will be developed into an exhibition center, conference hall and rest area for visitors.

“The first demolition of part of the U.S. Yongsan base wall is a historic starting point in developing Yongsan Park,” said Land Minister Kim Hyun-mee. “We will do our best to return Yongsan Park to the public.”