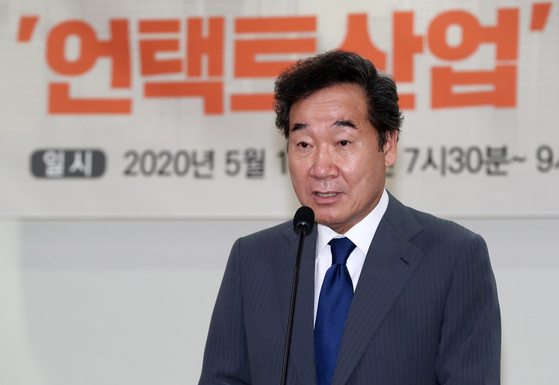 Former Prime Minister Lee Nak-yon speaks at a forum on Covid-19 at the National Assembly in Yeouido, western Seoul, on Wednesday. [NEWS1]

Former Prime Minister Lee Nak-yon is launching a policy think tank in preparation for an expected presidential run in 2022.

Lee, who has led polls for the 2022 race by large margins, is preparing to launch the think tank, a standard move for Korean presidential candidates, in the next few weeks. It will be composed of around a hundred professionals who will formulate his platform for a presidential campaign.

According to sources close to Lee, the group will largely be manned by experts who advised Lee when he was prime minister under President Moon Jae-in from 2017 to last January, as well as throughout his term as governor of South Jeolla from 2014 to 2017.

To bolster his expertise on the coronavirus, Lee will be recruiting medical and bioengineering experts to design policies for a post-Covid-19 era.

Lee heads the ruling Democratic Party’s (DP) special committee on the coronavirus outbreak, and some experts in that group will join the think tank, sources said.


Sources close to Lee said the organization would avoid recruiting so-called “polifessors” — a portmanteau of politics and professor used derogatorily to refer to professors deeply involved in politics — with prominent public profiles.

This appears to be an attempt to avoid repeating the controversy surrounding former Justice Minister Cho Kuk, who became an Achilles' heel for the Moon administration after the conservative opposition focused in on alleged misconduct involving his family.

The presidential hopeful also appears to be looking for allies among recently-elected DP lawmakers, according to one incumbent DP representative. Lee was set to have lunch with around 20 lawmakers-elect on Friday, a meeting widely speculated to be part of his outreach to build a cohort of allies in the ruling party to support his presidential bid.

The former prime minister’s influence and popularity is believed to have played instrumental roles in the election of many of those who won seats in last month's general elections, particularly among those in highly competitive districts. Lee served as chief of local support groups for 38 DP candidates — 22 of whom won their races on April 15.


Presidential aspirants in Korea typically launch think tanks around a year or two before running for office.

After he returned to politics in 1994 following a short study abroad program in Britain, former President Kim Dae-jung launched the Asia-Pacific Peace Foundation, which laid the foundations for what became Kim’s so-called “Sunshine Policy” — advocating reconciliation with North Korea — after he was elected president in 1997.

The experts who formed the Local Governance Research Institute, founded by former President Roh Moo-hyun in 1993, also went on to be key officials and policy advisers when Roh won the presidency in 2002. Professor Kim Byeong-joon, who served as Roh’s Blue House policy chief and education minister, was one such member.

A year before the 2007 presidential election, former President and Seoul Mayor Lee Myung-bak created the Global Strategy Institute, recruiting experts like Professors Yu Woo-ik and Kwak Seung-jun, who drew up some of the most iconic — and controversial — policies of the Lee Myung-bak administration like the so-called Korean Peninsula grand canal project.

Incumbent President Moon, whose policy advisory network was hurriedly established before his first failed bid for the presidency in 2012, was better prepared during his second run for president, when he was advised by a network of experts numbering up to 800.

Moon’s organization, called the People’s Growth, was unprecedented in terms of its size and diversity, bringing together economic experts like former Blue House adviser Cho Yoon-je — who later went on to be Moon’s first ambassador to the United States — and former Bank of Korea Gov. Park Seung.

Lee Nak-yon may be aiming to emulate these successful presidential bids of the past by forming an advisory network able to craft a unique brand for his presidential campaign in 2022.