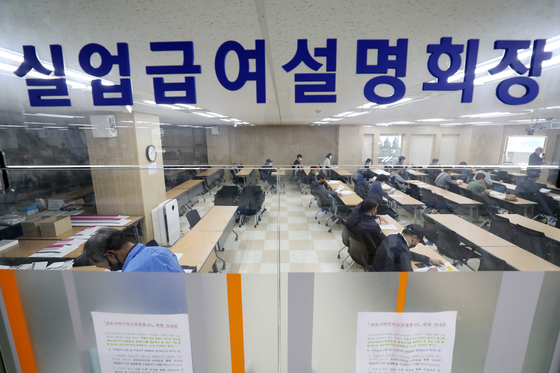 People learning on applying for unemployment benefits at a job welfare center in Seoul on May 15. Last month saw the biggest job loss in two decades. [YONHAP]


One-third of large companies in Korea say they may have to start laying off workers if the coronavirus outbreak continues to threaten the economy for another six months, breaking with their current strategy of looking for other ways to shore up their businesses short of lowering headcount.

According to the Korea Economic Research Institute on Sunday, the top 500 companies by revenue said they were securing liquidity (22.5 percent), suspending operations as well as encouraging employees to take time off (19.4 percent) and reducing wages (17.5 percent) to offset the effects of the coronavirus outbreak.

Laying off employees was the last option, with only 8.8 percent saying that this was on the table.

“Despite the serious crisis, it shows that big companies are at best trying to avoid downsizing their workforce,” said Choo Kwang-ho, head of the institute’s economic policy department.

Those shutting their doors for between a month and two were 19.4 percent of the respondents, for two to three months 12.9 percent, and for more than four months 6.5 percent.

While many have been trying to keep employees, even big companies say that they are now being pushed to the edge. The survey has found 32.5 percent saying they will have no other choice but to let go of their employees if the coronavirus crisis continues for another six months.

Companies can only apply for the government subsidy when business suspensions exceed 20 percent of total employee working hours in a month. Another condition is when the employee has been on leave for at least a month. The company has to prove that average revenue and production has declined 15 percent or more over the last three months while inventory has increased 50 percent or more.