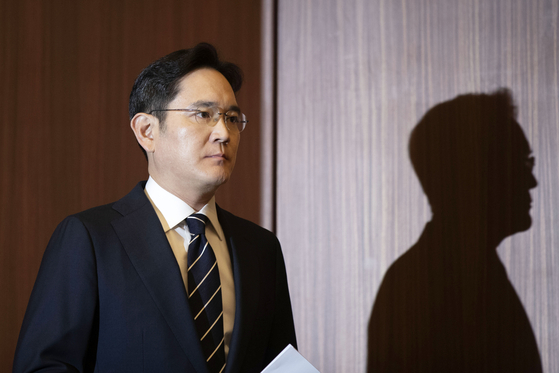 Samsung Electronics Vice Chairman Lee Jae-yong enters a conference room at the company's office in Seocho-dong, southern Seoul, on May 6 to apologize for past wrongdoings. [YONHAP]


A 10-minute statement given by Samsung Electronics Vice Chairman Lee Jae-yong on May 6 continues to reverberate around Korea, as the tech giant’s leader vowed to eschew the chaebol’s practice of keeping corporate control inside the founding families.

Lee’s apology and remarks divided observers, from politicians and business insiders to civic organizations, underscoring the significance that the chaebol, and their leaders, retain in Korea. Financial analysts and experts have rushed to investigate the impact the announcement will have on Samsung affiliates’ share prices.

Some observers commended the vice chairman’s message as a major step toward a more advanced and transparent corporate governance system, placing more value on the interests of shareholders than those of the governing family.

Others countered that the announcement lacked details as to how he will act on his promise and was calculated to win leniency in his upcoming retrial after he was convicted of bribing former President Park Geun-hye.

Still others continue to advocate for the chaebol leadership, saying that the involvement of founding family members allows for longer-term and more efficient management. They view professional managers as short-sighted, being preoccupied with delivering better earnings results in one quarter after another. 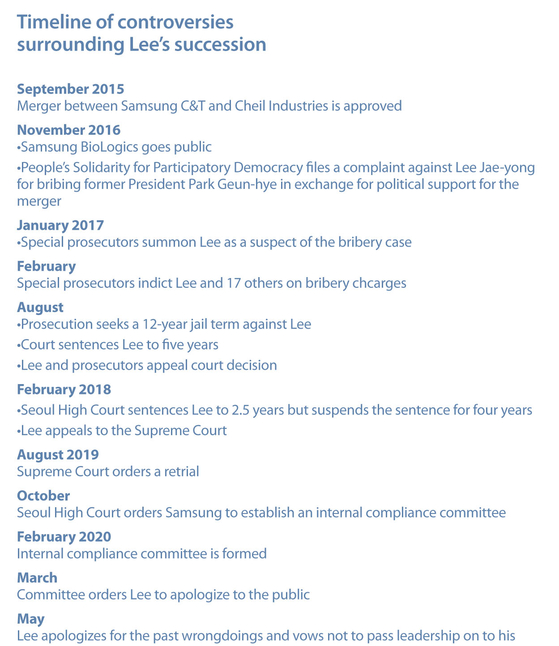 Bowing out of control?

Lee’s seemingly straightforward statement that “I won’t pass down managerial rights of the company to my children” was enough to split the experts.

“He might pass his stakes or wealth on to his children, but the point of his words is that he won’t rely on tricks or irregularities to keep his children at the top post,” explained an official at Samsung Electronics who requested anonymity to speak frankly about the vice chairman’s plans.

Joh Sung-wook also provided some brief comments on the subject during an interview with the JoongAng Ilbo, an affiliate of the Korea JoongAng Daily, earlier this month. Joh is the chairwoman of the Fair Trade Commission, the antitrust agency that has taken the lead in reining in cross-shareholdings and the disproportionate influence of the chaebol families over their companies.

“This will not only be helpful to Samsung but also to the Korean economy as a whole,” Cho said.

Her optimistic view was echoed by the leaders of the ruling Democratic Party and the opposition United Future Party.

Lee In-young, the former floor leader of the Democratic Party, praised Lee’s remarks. The center-left party has adopted a tough posture regarding the chaebol, including under the leadership of President Moon Jae-in.

That optimism was lacking, however, among civic organizations and labor unions.

Korea’s two largest labor unions, the Federation of Korean Trade Unions and Korean Confederation of Trade Unions, were skeptical, citing the lack of detailed plans over how Samsung will improve its corporate governance and ensure laborers’ rights.

“The apology reads more like Lee apologizing for Samsung’s faults on behalf of the company, rather than for himself,” the organization said in a statement. “He skipped acknowledging the controversial merger of Samsung C&T and the accounting fraud at Samsung BioLogics.”

The civic organization argued that the 2015 merger between Samsung C&T and Cheil Industries and a case of auditing fraud the same year, which ended up inflating the value of Samsung BioLogics, were used to strengthen Lee’s control over Samsung.

The controversies factor into Lee’s conviction, as well, as he was found guilty of bribing President Park Geun-hye in relation to the merger. He has been granted a retrial in the case, which is currently pending the prosecution’s request for a change of judge and venue.

As for his accounting fraud charges, the prosecution is expected to summon Lee in the coming week to verify the link between the accounting mishandling and his succession. 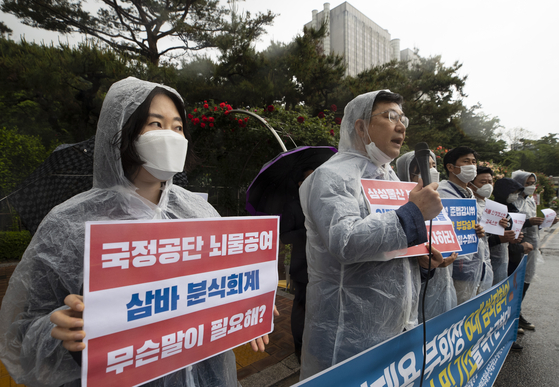 Members of People's Solidarity for Participatory Democracy and other civic groups protest on Friday to call for fair judgement of the legal enforcement agencies against Lee near the Seoul Central District Court in Seocho-dong, southern Seoul. [YONHAP]

In the market, uncertainties surrounding corporate governance, often seen during leadership transitions, erode the valuation of the companies.

But analysts believe that Lee’s move could ease those uncertainties.

“The commitment will likely enhance the value for shareholders,” said Kim Dong-won, an analyst at KB Securities.

Jeong Dae-ro, an analyst at Mirae Asset Daewoo, suggested the decision could help Samsung companies be valued more strictly based on their performance.

“Samsung C&T, Samsung Electronics, Samsung SDS and Samsung Life Insurance will have reduced uncertainties related to generational leadership transitions, and they will be solely assessed through their own corporate valuation,” Jeong said.

A 6.6 percent jump in the share prices of Samsung C&T, a de facto holding company for Samsung in the complex web of cross-shareholdings, on the day of the announcement reflects the expectation.

Many are looking to Sweden, where the Wallenberg family owns the vast swath of industries and corporations.

Although the meeting was held behind closed doors, local media outlets reported that Lee sought to adopt the Wallenbergs’ strategy, looking to a family conglomerate that successfully passed on the business to multiple generations while maintaining its social standing in the country.

“I think that the future governance model will divide ownership and management rights,” said Cho Myeong-hyeon, a business administration professor at Korea University who formerly served as the head of the Korea Corporate Governance Service. “The companies are owned directly or indirectly via family foundations, and the founding family could play a supervisory role in the board or as shareholders. In this regard, the Wallenberg model could be emulated.”