Amid pandemic, a sense of urgency for telemedicine

Amid pandemic, a sense of urgency for telemedicine 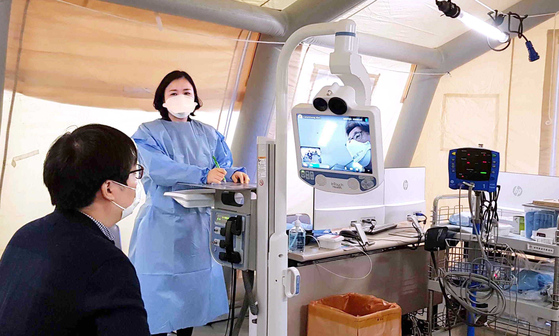 A man receives telemedicine services at a health center operating to prevent the spread of the coronavirus at Myongji Hospital in Goyang, Gyeonggi. [YONHAP]


Compared with its peers around the world, Korea has been slow to adopt telemedicine. But the coronavirus pandemic is pushing the field into the limelight as people increasingly try to avoid physical contact.


Telemedicine was first introduced on a trial basis in 2000, but the development of the field had been sluggish. People’s rejection to visit hospitals following the pandemic outbreak, however, has made the authorities take a new look at the technology with a goal to protect ill people and generate the growth of a new industry.

Field highlighted by the president
On April 28, President Moon Jae-in emphasized the need to “discover industries that could get attention following the coronavirus, including 'untact' medical services,” during a cabinet meeting held at the Blue House, using a popular term to refer to interactions that don't require person-to-person contact.

The Presidential Committee on the Fourth Industrial Revolution also recommended that the government reform its regulations on telemedicine to prepare for the likelihood that people will continue avoiding direct contact with others after the coronavirus outbreak is controlled.

“Telemedicine has long been controversial both inside and outside the medical industry,” committee leader Yoon Sung-roh said last month. “But considering the development of telemedicine by competing countries, we can no longer postpone [development of the field].” 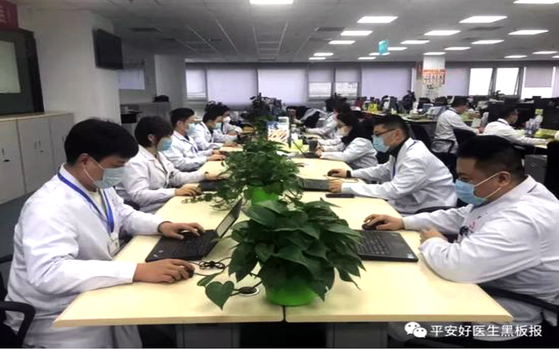 
Telemedicine overseas
Since the coronavirus outbreak began spreading globally, telemedicine has seen explosive growth in countries around the world. According to a 2020 report from Organisation for Economic Cooperation and Development, 26 of its 36 member countries have adopted telemedicine.

The United States in 1993 established the American Telemedicine Association, which now counts more than half of the country's hospitals as members. The number of U.S. residents who received treatment without human contact has grown by a factor of 170 compared to the period before the outbreak.

China, which adopted telemedicine in 2014, has responded to the pandemic by building an online platform to offer online consultations with doctors. Eleven companies took part in the service, including the payment platform Alipay and search engine Baidu. Ping An Good Doctor, which has the largest number of users, saw its membership jump tenfold after the coronavirus outbreak.

Japan allowed telemedicine to begin operating in 2015. People with confirmed or suspected coronavirus infections can use an app to request consulting services and medicine.

Korea, on the other hand, has been slow to adopt telemedicine, despite its reputation for top-tier medical professionals and facilities.

“There are a lot of digital wearables in Korea that could measure one’s pulse, blood pressure and body temperature,” said Song Hae-ryong, an orthopedics professor from Korea University Guro Hospital. “But they can’t be used for telemedicine due to the regulations. It is regarded as a mystery by the international medical industry that Korea, a leader in smartphones, information technology and medicine, isn't able to operate telemedicine.”

Korea kicked off the first telemedicine trial in 2000 at a health care center in Gangwon. But protests from the medical industry, including from doctors running private hospitals, and political concerns that medical treatment could become privatized led telemedicine to be bound by regulations. Efforts to revise regulations on telemedicine were made several times over the past years, but each of them failed.

Changes prompted by the pandemic
Recently, the Ministry of Health and Welfare in February announced it is temporarily allowing patients to receive consulting services or prescriptions from doctors over the phone. Remote monitoring was also permitted to allow people with little to no symptoms to get treated.

But the Korean Medical Association has rejected requests to provide medical services over the phone, arguing it could add confusion since the system that supports remote treatment hasn’t yet been established.

But following the coronavirus outbreak, a dramatic increase in demand for the service has prompted a rapid expansion of the field. According to the ministry, 103,998 prescriptions have been filled at 3,072 medical facilities nationwide between Feb. 24 and April 12. Six out of 10 hospitals were private hospitals.

A piecemeal process
The medical industry has suggested the government allow telemedicine in a piecemeal fashion.

“Practicing remote monitoring first is desirable,” Song said. “Since older patients aren’t able to leave home, establishing a telemedicine monitoring system at a patient’s home or town is a must for an aging society.”

“It would be ideal for [bigger] hospitals to build a telemedicine platform and jointly use it with medical facilities nationwide,” said Kim Yon-su, president and CEO of Seoul National University Hospital.

Using this system could help hospitals share knowledge on serious or rare diseases and monitor the cases together, he added.

Professor Hong Sok-chul, who teaches economics at Seoul National University, said, “Providing medical consulting services and giving prescriptions over the phone, which the government has temporarily allowed, isn’t sophisticated telemedicine. But it is a groundbreaking change that passed the principle on face-to-face medical treatment. It also symbolizes the age after the coronavirus. Relaxing regulations on telemedicine isn’t just for related corporations or medical institutions. The largest beneficiary is the public.”