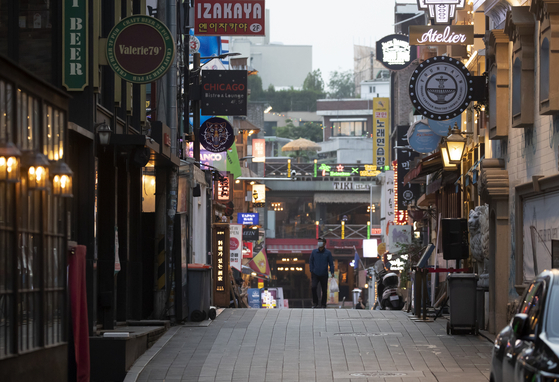 A street in Itaewon-dong, central Seoul, is relatively empty over the weekend after a cluster of infections emerged at several night clubs in the area throughout this month. [YONHAP]


Korea recorded 13 new coronavirus cases on Saturday, signaling a slowdown in infections related to a cluster at a nightclub in Itaewon earlier this month, according to health officials on Sunday.

Only six of the new cases occurred domestically, four of which were linked to nightlife hot spots in Itaewon-dong, central Seoul. A large majority of clubgoers have been tested, and the total number of cases tied to the nightclubs stood at 168, said the Korea Centers for Disease Control and Prevention (KCDC).

The total number of Covid-19 infections in the country stands at 11,050. No new deaths were reported Saturday, leaving the total death toll at 262.

A total of 747,653 people in the country have received tests so far.

All four of the Itaewon-linked cases occurred in Seoul, which accounted for 93 of the 168 cluster cases. The two other non-Itaewon domestic infections involved a mother and her teenage daughter living in Nowon District after the mother apparently contracted the virus at work from a patient who visited a bar in Hongdae, a vibrant nightlife neighborhood in western Seoul.

Health officials said that while the decreasing rate of new cases linked to the Itaewon cluster was positive, this week is a critical juncture in assessing whether domestic infections will continue.

The cases linked to the cluster began with one man from Yongin, Gyeonggi, who tested positive on May 6 after visiting several nightclubs in Itaewon over the Labor Day holiday. Health officials thereafter focused on tracing clubgoers, and infections began showing up clearly from May 8, when Korea recorded a double-digit number of infections for the first time in weeks.

The government faced major difficulties in tracking down visitors to the Itaewon hot spots, as many of the clubs that saw their customers infected were frequented by gay men, part of which explains why some partygoers wrote down fake phone numbers at the entrances.

Local governments had to deploy other contact tracing methods such as monitoring credit card transactions — as well as issuing public alerts warning partygoers to get tested lest they face punishment.


The measures — which were criticized by some LGBT rights groups and foreign media — may have allowed Korea to evade another explosive cluster of infections like the one it experienced in February with members of the controversial Shincheonji church in Daegu and North Gyeongsang.

On Saturday, the number of new infections linked to people returning from abroad — seven — once again began outpacing domestic infections, showing that health authorities may have gained control over the Itaewon cluster. Cases coming from abroad carry relatively fewer risks, since people who enter the country are tested upon entry and are closely monitored for 14 days.

This month’s jump in infections has, however, taken a toll on regular government functions at a time when social distancing rules were relaxed earlier this month.

According to the Ministry of Justice on Friday, a guard in the Seoul Detention Center in Uiwang, Gyeonggi, tested positive, prompting officials to shut down the operations at the detention center and the Seoul Central District Prosecutors’ Office in Seocho District, southern Seoul, where several inmates had been questioned last week.

The ministry said the guard's infection could be traced to the Itaewon cluster — but in a chain of four people. The guard attended a wedding in Changwon, South Gyeongsang, on May 9 with a friend whose infection was later confirmed. The friend is suspected of having contracted the disease at a noraebang, or singing room, that had previously been patronized by a patient living in Dobong District of northern Seoul. That patient had contact with a person from southern Seoul's Gwanak District who visited a club in Itaewon and got infected.


The detention center holds people being investigated and criminal defendants undergoing trials. Some 34 people in the prosecutors' office who had contact with inmates were put under self-quarantine.