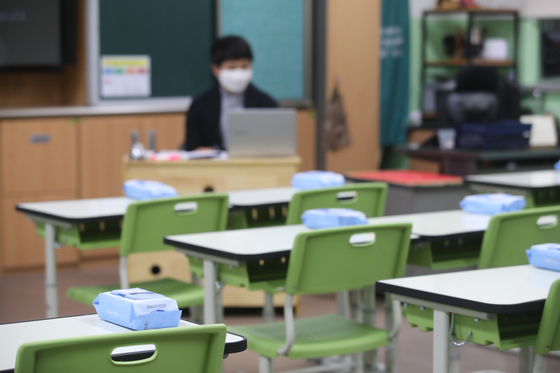 Wipes sit atop classroom desks at an elementary school in southern Seoul as teachers prepare for the reopening of classes. [YONHAP]


On a KBS program, Chung said the government could no longer delay classes for high school seniors as they are due to take college entrance exams in December.

Chung noted it was “a relief” that the number of cluster infections liked to nightclubs in Itaewon-dong, central Seoul, was stabilizing, but added that the government would “respond with agility if an unexpected situation occurs.”


No plans were in place to delay college entrance exams, the prime minister said, which are scheduled for Dec. 3 this year.

The spike in coronavirus infections linked to Itaewon prompted the Ministry of Education last week to postpone its timetable for reopening classes in three separate batches by one week.

Under the revised schedule, the start dates for lower grades will be pushed back by one week: 11th, ninth, first and second graders, as well as kindergartners, will now resume classes on May 27; 10th, eighth, third and fourth graders on June 3; and fifth, sixth and seventh graders on June 8.


Elementary, middle and high school students unprecedentedly kicked off their new school year online in a phased manner in April after multiple delays due to the coronavirus outbreak. The new school year usually begins in early March.

Teachers, students and parents have been struggling with the limitations of remote learning, such as difficulties with concentration and engagement online, limited interactions with their peers and teachers and over basic technical issues.


Many others are opposed to reopening schools at this time. A petition on the Blue House website calling on the government to delay classes even further garnered over 219,000 signatures as of Sunday, noting that “schools are the most vulnerable places for Covid-19 infections.”


Korea’s official social distancing campaign period wrapped up May 5 after more than two months amid a significant drop in new cases, and the country has transitioned to "everyday life” quarantine practices.


But the Itaewon-related infections led to criticism that the government may have been too hasty in relaxing social distancing measures.

With regards to whether the transition came too early, Chung said he stood by the government’s initial assessment, since it could no longer afford to “continue sacrificing the economy” for the sake of infection concerns.

“When [the Covid-19 situation] improves in foreign countries, our economy will also improve,” Chung said. “Even if recovery doesn’t happen with a V-shaped curve, we will enforce diverse measures to enable economic recovery in a U-shaped curve.”