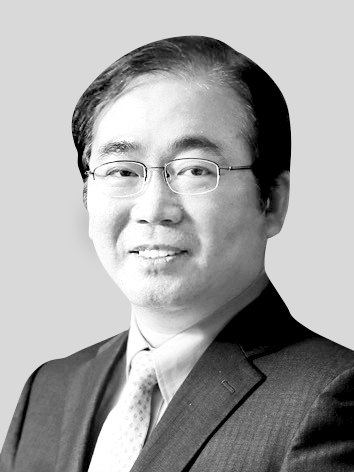 Lee  Ha-kyung
The author is the chief editor of the JoongAng Ilbo.

The people of India’s Punjab state are seeing the snow-covered mountains of the Himalayas, about 150 kilometers (93 miles) away from their towns, with their bare eyes. About 4,600 people died in China of coronavirus infections, but more than double that number of people managed to extend their lifespans due to eased air pollution thanks to the economic lockdown in China after the Covid-19 outbreak. As economic activities and use of fossil fuels declined, air quality has improved. This is an irony of the pandemic.

The coronavirus has issued a final warning to the human race, which has turned into slaves of greed. Stephen Hawking once warned that Earth could turn into a planet like Venus, with temperatures as high as 250 degrees Celsius (482 degrees Fahrenheit) and acid rain if humans don’t curb climate change. In order to prevent a mass extinction, we must stop our abuses of Earth.

Fortunately, humans started moving towards an exit called the Green New Deal. German Chancellor Angela Merkel promoted last month a “green recovery.” The European Union agreed to the European Green Deal to accomplish zero carbon emissions. The EU also decided to invest 1.5 percent of its total gross domestic product, or 330 trillion won ($267  billion), to fight climate change. The notion of a Green New Deal was also promoted in the United States since 2018 by Democratic politicians such as Bernie Sanders and Pete Buttigieg.

Although Korea is an exemplary country in the war against the coronavirus pandemic, the Green New Deal idea has yet to catch on. President Moon Jae-in mentioned a Korean-style New Deal in a speech last week to mark the third anniversary of his inauguration. But it wasn’t green.
Jennifer Morgan, chief of Greenpeace International, sent a letter last month to Moon urging Korea to introduce the Green New Deal. UN Secretary General António Guterres also called on Korea to lead the campaign in the post-coronavirus pandemic era.

Korea is ranked 58th among 61 countries on the Climate Change Performance Index. It produces the world’s seventh-largest amount of greenhouse gas emissions. Korea is the world’s ninth-largest energy consumer, while its renewable energy generation is ranked at the bottom of the global list. Korea is also recording the highest fine dust pollution among the Organisation for Economic Cooperation and Development countries.

Korea is called a “climate villain” in the international community. The letter from Greenpeace is a warning to the chief climate villain.
“Green” used to be an on many agendas of liberals around the world. It is surprising that President Moon is actually passive about “green” issues. It is probably because “Green Growth” was a policy slogan of former President Lee Myung-bak. Lee’s “Green Growth” agenda was an idea internationally recognized. While placing importance on nuclear energy (low carbon energy) Lee tried to invest in renewable energy. As a result, Korea managed to host the Green Climate Fund, a development bank for the environmental sector. Its home is now Songdo, Incheon.

But “green” became a taboo word in the Park Geun-hye administration. The presidential commission on green growth was reorganized and supervised by the prime minister. Because of Park’s personal hatred of Lee, an important national asset has lost its value. Although Moon vowed to uphold “Green Growth” in the first year of his presidency, the promise was not kept.

The Moon administration is promoting renewable energy, but greenhouse gas emissions are increasing as coal power generation has increased due to his policy to shut down nuclear plants. Lee So-young, a lawmaker-elect of the ruling Democratic Party
(DP), said, “Building new coal plants, which can only be operated for less than a decade amid the latest trend of zero carbon emissions, should be stopped.”

Although former President Lee, a conservative, promoted the liberal environmental agenda, Moon, a liberal, is avoiding it. How is he different from Park? Furthermore, the ruling party largely promoted the “2050 Green New Deal Vision” during the last general elections campaign.

After the general elections, senior DP lawmakers, including Song Young-gil, Hong Young-pyo, Woo Won-shik and Kim Doo-kwan, are demanding a “Green New Deal” from the administration. Last week, during a cabinet meeting, Moon finally issued a significant message. “Lately, Green New Deal has become a hotly discussed topic,” Moon said. “Many said it should be included in the Korean-style New Deal. The Ministry of Environment, the Ministry of Trade, Industry and Energy, the Ministry of SMEs and Startups and the Ministry of Land, Infrastructure and Transport must consult and send me a written report if more jobs can be created through a Green New Deal.”

A Green New Deal is an unavoidable choice. When the EU’s Green Deal is implemented, Korea, a carbon exporter, will have to pay a carbon border tax. “Although three Korean companies — LG Chem, Samsung SDI and SK Innovation — together won deals worth 300 trillion won for electric car batteries, they build factories overseas,” said Han Byung-hwa, an analyst at Eugene Investment & Securities. “They do so because they cannot meet the requirements of the buyers that batteries must be produced by clean renewable energy. That is why we need a Green New Deal.”
According to a research paper from Stanford University, Korea will have 1.44 million new jobs if the country shifts to 100 percent renewable energy by 2050. The world is transforming its relationship with the Earth from exploitation to coexistence. Humankind has begun a grand journey to change the paradigm of civilizations that has been based on fossil fuels for 300 years since the industrial revolution.

If Moon responds passively to climate changes, it will hurt Korea at the moment it finds itself with soft power for the first time in history. Companies will suffer economic losses. No Korean president should ever be a climate villain.