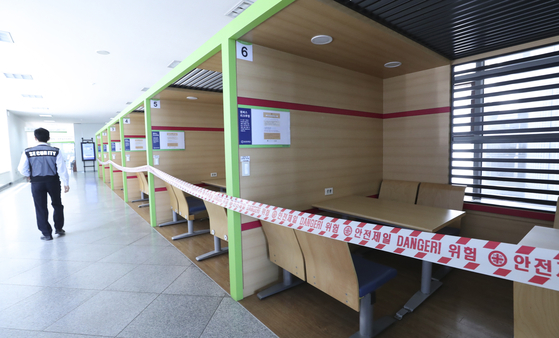 A consulting booth where companies′ corporate human resource official met with students seeking jobs at a university campus in Seoul on Wednesday. The number of people that have stopped or suspended their job seeking efforts have increased in April as companies′ hiring plans have been delayed with the coronavirus outbreak while some decided not to attend job interview in fear of contracting the virus. [YONHAP]


The coronavirus has wiped out the largest number of jobs in two decades.

According to Statistics Korea, the number of people employed as of April was 26.56 million — a fall of 476,000 or 1.8 percent decline year-on-year.

It is the largest number of jobs lost since February 1999, when the country was still struggling through the Asian economic crisis. In February 1999, 658,000 jobs were lost.

In March 195,000 jobs were wiped out compared to a year earlier, the first time in a decade for Korea to see its total jobs number shrink year-on-year.

The impact was especially hard on service jobs and on young workers, women and temporary workers.

Jobs with face-to-face interactions with other people — including restaurants and private cram schools known as hagwon — accounted for many of the lost jobs.

“As strict social distancing to prevent the spread of the coronavirus continued and with the number of foreign tourists falling, the number of people employed — especially in restaurants and lodging — have shrunk,” said Eun Soon-hyun, head of the agency’s social statistics bureau.

The restaurant and lodging industry lost 212,000 jobs, a 9.2 percent decline.

Wholesale and retail businesses had to let go 123,000 employees, down 3.4 percent.

“The difficulty in services has worsened while a dark shadow is on our manufacturing industry, which has been holding up the economy,” Finance Minister Hong Nam-ki said in a Facebook post Wednesday.

On the flip side, jobs in health and social welfare, agriculture and fisheries as well as transportation and storage grew.

By age, the younger generation was hit hardest last month: Some 245,000 people between the ages of 15 and 29 lost jobs.

All age groups lost jobs except for people 60 or older.

The number of temporary employees shrunk 587,000 compared to a year ago. That 12 percent decline is the largest since data started being collected in its current form in 1990.

“It seems younger people, women, temporary workers and day laborers were most affected by Covid-19,” said Eun of the statistics agency.

The number of people on temporary leave hit 1.13 million, a 318.8 percent surge year-on-year, although it was less than the record number of 1.26 million hit the previous month.

Finance Minister Hong in his Facebook post noted that the increase in people on temporary leave is proof that Korea’s safety net is working as they are still employed thanks to government subsidies to companies to finance employees on paid leave. However, he noted that if the situation continues it could lead a surge in unemployment.

According to the government the increase in people who are no longer actively engaging in the economy is largely because companies are postponing hiring or the job seekers fear getting infected with the virus.

The report stated that “weakening consumption, cross-border trade and economic growth are exacerbating the existing strain” on profitability and companies' finances.

“We expect a sharp fall in business activity in the first half of 2020,” Yoo Wan-hee, Moody’s vice president said. He added that the economy will likely recover in the second half and through 2021.

Moody’s said 13 of the 22 non-financial companies that it rates are either faced with negative ratings outlooks or having their ratings downgraded.

Moody’s latest growth projection from late April is a half percent contraction in the economy for 2020. Moody’s has been lowering its outlook since the pandemic broke from 2.1 percent to 1,9 percent in February, to 1.4 percent in early March and 0.1 percent at the end of March.

Finance Minister Hong said the government will focus this week and next on coming up with measures to create 550,000 jobs or more.

“It’s hard to predict how long this dark tunnel will continue in regard to our job market considering the depressing global economic forecast and the difficult quarantine situation,” Hong said in his Facebook post. “However, we shouldn’t just worry but arm ourselves with exceptional determination to protect or create even a single job.”