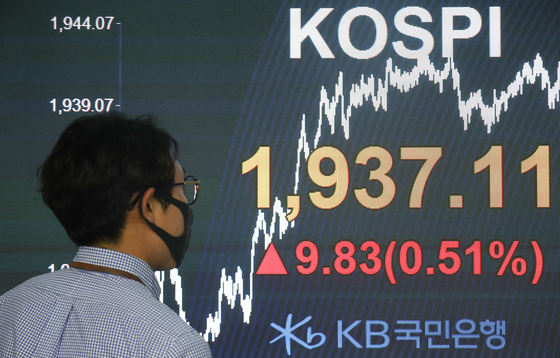 A dealer walks past an electronic signboard in the dealing room of KB Kookmin Bank in Yeouido, western Seoul, Monday. The Kospi closed at 1,937.11, a 9.83 point rise from the previous close. [YONHAP]


Stocks closed higher Monday on hopes of global stimulus measures and rising oil prices. The local currency fell against the dollar amid a renewed trade dispute between the United States and China.

The index got off to a weak start amid fears of a renewed trade row between the United States and China, prompted by U.S. sanctions on China's tech giant Huawei.

Hopes for global stimulus measures, along with a recovery in global oil prices, boosted investor sentiment.

"[U.S.] President Donald Trump is pushing for the so-called 'new deal' ahead of the presidential election that combines massive investment in social infrastructure programs with a negative interest rate," Oh Chang-seop, an economist at Hyundai Motor Securities, said.