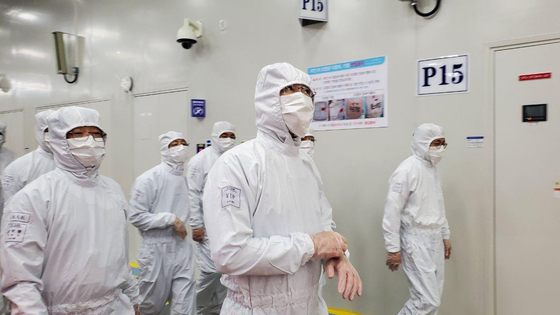 This Xi'an factory is Samsung’s only chip production plant outside Korea. The visit also gave Lee an opportunity to meet with executives at the factory and discuss the ongoing Covid-19 pandemic and countermeasures to keep it from affecting production.

After returning from a one-year imprisonment in February 2018, the vice chairman has actively made visits to research and development (R&D) centers and factories worldwide. But business trips across borders had stopped after the Covid-19’s global spread. Lee's previous visit to an overseas location was made to Samsung’s Brazil factories in January.

Due to its reputation as the origin of the Covid-19 pandemic, China is not the most desired trip location for global business leaders at the moment. Lee is the first chief of a multinational company to visit the country since the pandemic’s spread, Samsung claimed.

“There’s no future for a company that’s trapped in the past or present. We need to discover a new growth engine in order to prepare for a massive change that’s coming up,” Lee told executives in a meeting. “We have no time. This opportunity shouldn’t be missed.”

The last time Lee stopped by the Xi'an factory was in February 2019, when he met with factory workers during China’s national holidays.

For a top executive that normally keeps a low profile, Lee’s publicized visits have been interpreted by local media as signs of his business strategies or as indicators of which technology field the vice chairman will continue investing in.

The Xi'an factory has a significant position in Samsung’s chip business — the product segment that generates most of the electronics maker’s sales. The plant received a $15 billion investment. Despite the pandemic, 2017 expansion plans to complete a second factory inside the Xi'an complex this year have not been pushed back.

In March, a ceremony was held at the factory to celebrate its first batch of mass-produced NAND flash memory chips. Last month, Samsung sent a team of about 200 engineers who are working to finish the second production line.

Lee’s trip also comes as relations between the United States and China have become fraught recently. Korean news outlets raised the possibility Monday that part of Lee’s motivation for visiting the Xi'an complex is to reaffirm the company’s ties with China.