President Moon Jae-in on Monday promised a reinvestigation of the 1980 massacre of pro-democracy activists in Gwangju to find out who ordered the mass shootings.

“The government will do all it can to investigate the truth of May 18,” Moon said, referring to the starting day of the crackdown in 1980. “We will provide the May 18 Democratization Movement Truth Commission — which began its activities in earnest on May 12 — all the support it needs so that it can fully reveal still-undiscovered truths.” 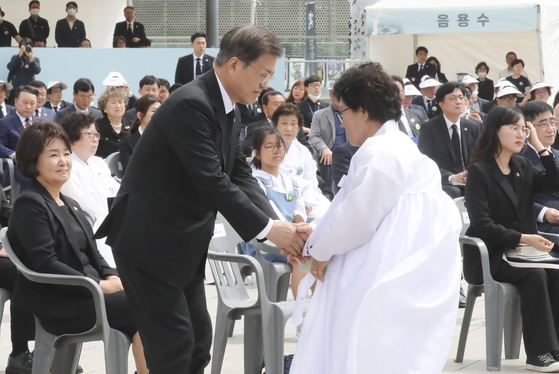 Moon made the remarks in a speech at a ceremony marking the 40th anniversary of the May 18 Democratization Movement in Gwangju. For the first time, the ceremony was held in front of the former South Jeolla provincial government office building, where gunfights between civilian militias and martial law troops took place in 1980.

An independent fact-finding commission launched last week will investigate the brutal crackdown on the uprising from May 18 to 27, 1980, which called for democracy and an end to the junta of Chun Doo Hwan, who rose to power in a military coup just five months earlier.

Although a law was introduced in March 2018 to reopen a probe, no progress was made until this month due to a political deadlock. While the official death toll in the Gwangju crackdown was 193, hundreds more were believed to have been killed or injured by armed soldiers.

The commission will investigate major questions unresolved for the past four decades, including who issued the order to troops to open fire on protesters.

“The facts about such state violence must be clarified without fail by uncovering the people who gave the orders to open fire, the massacre of civilians by martial law troops, machine gun shots from helicopters and the suspicions about cover-ups and fabrications,” Moon said in his speech.

The commission will also investigate the alleged secret burial of victims, who are still recorded as missing persons, as well as soldiers’ alleged rapes of residents. A longstanding argument of conservatives that North Korean special forces were secretly sent to instigate the uprising will also be investigated.

“Its purpose is not about punishment but about properly documenting history,” Moon continued. “Instead, if those who are accountable show courage and confess the truth even now, the path to forgiveness and reconciliation will open up.” 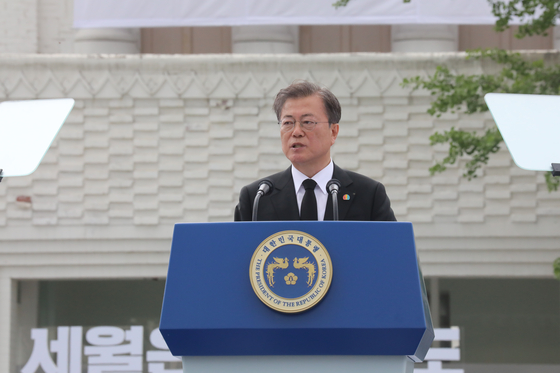 President Moon Jae-in gives a speech at the 40th anniversary ceremony of the May 18, 1980, Gwangju Democratization Movement on Monday. [YONHAP]

Moon’s promise to get to the bottom of the state-led violence in Gwangju was made as Chun and his former aides in the junta continued to deny their responsibilities.

“Every year, we face a demand for an apology,” Min Jeong-gi, former public communications secretary of the Chun Blue House, told Yonhap News on Monday. “If they are demanding an apology for mass shooting at civilians, we can’t, because it is not true [that we had issued an order].”

Min said martial law troops opened fire on protesters without an order from the upper chain of command. “At the time, the police and the martial law troops were killed by the civilian militias’ buses and armored vehicles while resting because they were exhausted after suppressing demonstrators,” Min said. “How could they remain calm when their comrades were killed in front of their eyes? It was not a situation where a commander had given advance permission to open fire.”

Min also said Lee Hui-sung, Army chief of staff and martial law commander, was responsible for the bloody crackdown on protesters. “He himself had already admitted to his responsibility,” Min said.

Moon has consistently pointed out that no one has been held legally responsible for the mass shootings. In an interview with Gwangju MBC on Sunday, Moon said it is necessary to find the person who holds the final responsibility.

In the Monday speech, Moon also vowed to continue his efforts to amend the Constitution to include the spirit of the May 18 Gwangju Democratization Movement. In 2018, Moon proposed a constitutional amendment to change the preamble to mention the movement, but the bill was never voted on due to conservative opposition lawmakers’ protests.

“If the revision is achieved some day, I hope that the cause will be upheld,” Moon said.

Top politicians from the ruling and opposition parties attended the ceremony Monday, and among them was Rep. Joo Ho-young, the floor leader and acting head of the conservative opposition United Future Party (UFP). 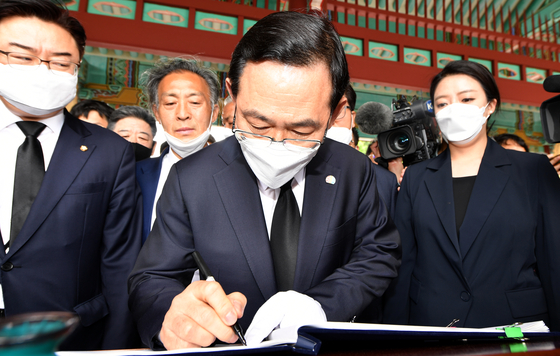 Rep. Joo Ho-young, floor leader and acting head of the United Future Party, signs a guestbook at the May 18 National Cemetery on Monday. [YONHAP]

On Saturday, Joo issued a public apology to end the party's reputation for denying the significance of the movement. The UFP’s predecessor, the Liberty Korea Party, faced a public uproar after some of its senior members described the democracy movement as a riot influenced by North Korea.

“It must never be repeated that some individuals’ personal opinions were misunderstood as the party’s official stance,” Joo said.