Health officials Monday said the cluster of coronavirus infections in Itaewon, central Seoul, was largely under control, with only two new cases found Sunday, bringing the total number of infections to 170.

The figure is a significant drop from last week, when 20 to 30 new cases were being reported on an almost daily basis.

But Yoon Tae-ho, a high-level official from the Korean central government’s Covid-19 command center, warned against complacency Monday in a press conference, saying there were 11 metropolitan areas and provinces across the nation with patients related to the Itaewon hot spot, which means they may have unwittingly spread the disease in their respective local communities before exhibiting symptoms of the virus and testing positive.

“Now’s not the time to let our guards down,” Yoon warned. “A ‘silent transmission’ that we don’t know about could exist.”

Yoon once again asked anyone who visited Itaewon-dong between April 24 and May 6 to get tested.

The Covid-19 command center said that some 65,000 virus tests have been administered so far in connection to the Itaewon cluster, which basically seems to cover everyone with a possible risk of infection. 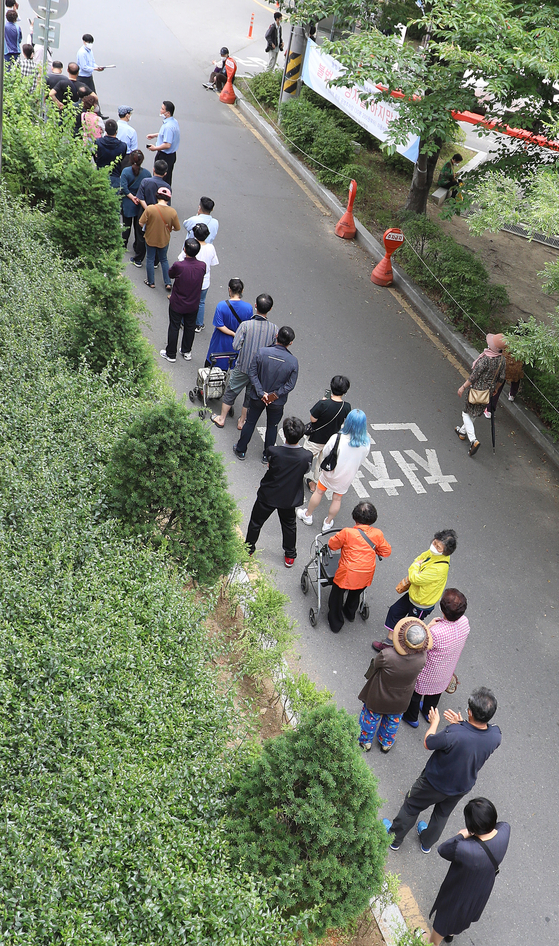 People wait in line to apply for the government’s Covid-19 relief payments Monday at a welfare center in Daegu. [NEWS1]

Among 170 people who have been traced to the Itaewon cluster by Monday noon, 89 were infected after visiting Itaewon clubs and bars, while the rest were people who came into contact with the 89, including friends, relatives and colleagues.

Ninety-three people live in Seoul, 33 in the surrounding province of Gyeonggi, 25 in Incheon, nine in North Chungcheong, four in Busan and one each in Daejeon, South Chungcheong, North Jeolla, South Gyeongsang, Gangwon and Jeju Island.

Thirty-three are female and the rest are male.

In terms of Korea’s daily infections, the Korea Centers for Disease Control and Prevention (KCDC) announced that 15 people tested positive for the coronavirus Sunday, 10 of whom represented imported cases. Of the five domestic cases, two were connected to the Itaewon cluster.

By Sunday midnight, 263 people had died, up by one from the previous day, while 9,904 people have been declared fully recovered, up by 16 from the day before. 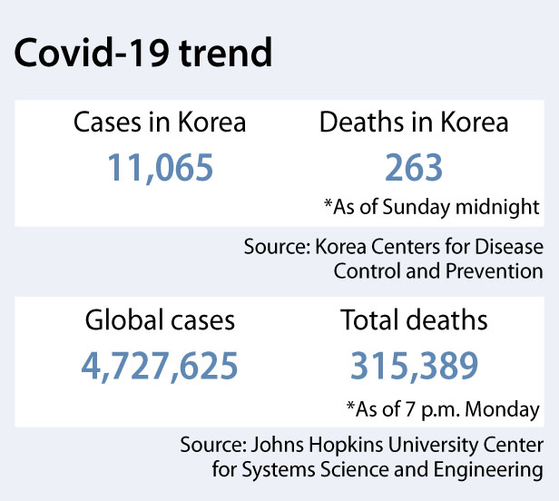 Of Korea’s total 11,065 patients, 1,177, about 10.6 percent, contracted the coronavirus while overseas, KCDC data showed, mostly in the United States or Europe.

Among the latest cases linked to the Itaewon cluster was a Vietnamese man in his 30s who lives in Songjeong-dong, Gwangju, Gyeonggi. Health officials said he visited Queen, a club in Itaewon, on May 1, though at which hours remains unclear. One of the initial spreaders of the virus, a 29-year-old Korean man living in Yongin, Gyeonggi, visited five clubs and bars in Itaewon from 11 p.m. on May 1 to 4 a.m. on May 2: Queen, King Club, Soho, Trunk and H.I.M.

Four other clubs and bars in Itaewon that were visited by Covid-19 patients recently were Pink Elephant, Fountain, Made and Pistil.

According to details of the Vietnamese man’s movement disclosed by the Bucheon city government in Gyeonggi, he visited his acquaintance’s house in Bucheon on the evening of May 9, where he had contact with 32 people, after which he went to the Merit Tourist Night Club from 11 a.m. that night and stayed for about an hour and a half.

Officials Monday warned anyone who went to the nightclub in Bucheon around that time to go get tested for the coronavirus. The Vietnamese man tested positive last Saturday evening and is currently hospitalized.

At least one person who had contact with the Vietnamese man has been infected so far.

Authorities Monday also warned the public against visiting singing rooms, known as noraebang in Korean, saying that people who partied in Itaewon clubs and bars were recently found to have spread the coronavirus in singing rooms. At least three such establishments have been named so far, including Byeol Byeol Coin Noraebang in Gwanak District, southern Seoul; Gawang Coin Noraebang in Dobong District, northern Seoul; and Rock-Q, which is also a type of “coin noraebang,” in Mapo District, western Seoul.

Health officials said poor air circulation seemed to be a core reason why people got infected in the three coin singing rooms.

Infections traced to a 25-year-old Korean hagwon (cram school) instructor in Yonghyeon-dong, Michuhol District in Incheon — who visited King Club in Itaewon early this month and later lied to officials about his occupation — also rose to 17 Monday.

A 66-year-old taxi driver who the instructor was a customer of on May 4 tested positive for the coronavirus on Sunday. Officials said the driver seems to have worked for about 10 days in between May 4 and Sunday, which raises chances he may have transmitted the virus to other passengers.