The Japanese Foreign Ministry reported its 2020 Diplomatic Bluebook at a cabinet meeting presided over by Prime Minister Shinzo Abe on Tuesday which once again asserted that Dokdo, which it calls Takeshima, is its “inherent territory” and called Korea’s “occupation” of the islets “illegal.”

Kim In-chul, the spokesman of the Korean Foreign Ministry, said in a statement, “The Japanese government’s unjust claims do not have any impact on the Republic of Korea’s sovereignty over Dokdo” and that Seoul “will respond sternly to any provocations over Dokdo.”

Seoul maintains that the Dokdo islets historically, geographically and under international law are an integral part of Korean territory. 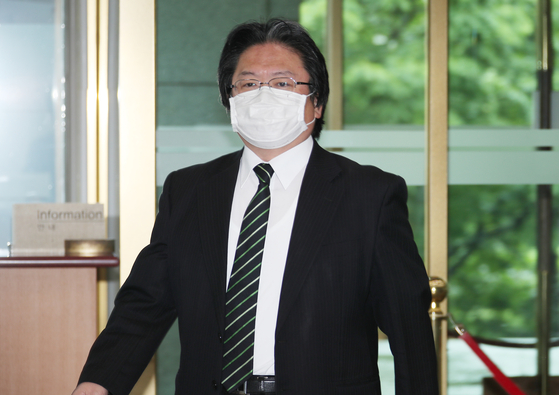 Hirohisa Soma, a senior official from the Japanese Embassy in Korea, enters the Foreign Ministry building in central Seoul Tuesday. Seoul lodged a formal complaint over Tokyo’s claims over the Dokdo islets in its 2020 Diplomatic Bluebook. [YONHAP]


Kim Jung-han, the Foreign Ministry's director-general for Asia and Pacific affairs, summoned Hirohisa Soma, a senior official from the Japanese Embassy in Korea, to the ministry in central Seoul Tuesday morning to express regret and urge Tokyo to retract its claims over Dokdo.

While Japan has claimed Dokdo previously, it introduced the phrase Korea’s “occupation of Takeshima is illegal” starting in its 2018 Diplomatic Bluebook, seen as a move to strengthen its territorial claims over the islets.

However, Japan’s newest diplomatic bluebook again referred to Korea as "an important neighbor," a phrase that has been omitted in the previous two years. The phrase could reflect Abe’s remarks describing Korea as such in parliamentary sessions starting last October.

Japan had called Korea its “most important neighbor which shares strategic interests" in its 2017 bluebook.

Kyodo News reported that the 2020 Diplomatic Bluebook stresses Japan and Korea’s heightened tensions over trade controls and compensation for wartime labor victims and said bilateral relations remain in a “severe situation” amid the various disputes.

Korea eventually announced plans to terminate their bilateral military intelligence-sharing pact, the General Security of Military Information Agreement, or Gsomia, but it later suspended the decision.

Seoul and Tokyo also continue to struggle over the issue of wartime sexual slavery. The two countries’ foreign ministries tried to resolve with the so-called comfort women deal of 2015 which called for an apology from the Japanese government and a 1 billion yen fund ($9.3 million). The Moon Jae-in administration has called the deal "insufficient."

Japan has issued the diplomatic bluebook annually since 1957, and the report generally reflects on events of the past year through April of the current year.