Hydrogen fuel plants to be built in Gwangju, Changwon

Hydrogen fuel plants to be built in Gwangju, Changwon 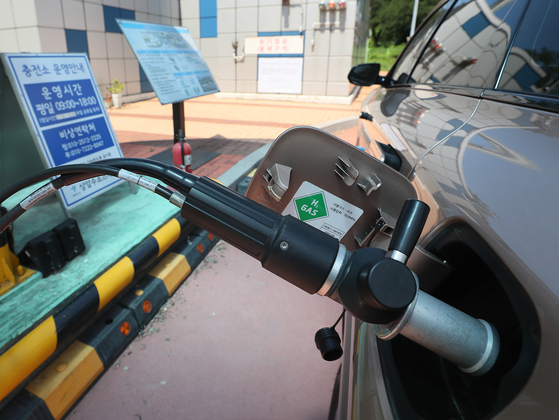 
Gwangju and Changwon, South Gyeongsang, will be the sites of large-scale hydrogen production facilities, part of the government's goal to remake its energy sector into a so-called "hydrogen economy."


Busan, Daejeon and Chuncheon, Gangwon, were selected for small-scale versions of the facility, the Ministry of Trade, Industry and Energy announced Tuesday.

The ministry plans to eventually have the capacity to manufacture roughly 7,400 tons of hydrogen fuel annually, enough to fuel about 50,000 hydrogen vehicles including bus.

In a statement, the ministry said its goal is to invest in the infrastructure necessary to create a traffic network based on hydrogen fuel. The government first unveiled its vision for a hydrogen-based economy in January 2019.

The government last year selected three regions to receive investments of 15 billion won ($12.2 million) each: Samcheok in Gangwon; Changwon in South Gyeongsang; and Pyeongtaek in Gyeonggi.

The three smaller plants, which will each have the capacity to produce one ton of hydrogen fuel a year, will each receive 5 billion won this year.

The ministry plans to select two additional regions this year for smaller plants, and the total government investment will amount to 250 billion won.