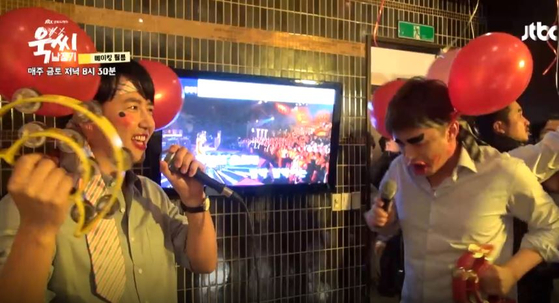 The author is the head of the sports team of the JoongAng Ilbo.

In April 1991, a booth with a strange device was installed at the Royal Electronic Entertainment Center in the Dong-A University neighborhood of Hadan-dong, Busan. The device was a modified karaoke machine. If you inserted a coin and chose a song, the machine played the instrumental version of the song. The user could sing while reading the lyrics on the monitor. It was the first karaoke machine in Korea.

Daisuke Inoue was a performer at a bar in Kobe, Japan. One day, a patron asked him to accompany him on a business trip and play music for him. As he could not join, Inoue recorded the accompaniment on a tape. Getting the idea from the experience, he created the first karaoke machine by modifying a car stereo and amplifier in 1971. The machine that used an eight-track cartridge tape was named “8 juke.” Such machines are now known as “karaoke,” meaning “empty orchestra” in Japanese.

Over the long holiday in early May, clubs in Itaewon-dong, central Seoul, became the sources of a cluster of Covid-19 infections. A primary patient who visited a club there went to a noraebang in Gwanak District, southern Seoul. A person who was there at the time was infected. The secondary patient met a co-worker at a bar in Hongdae, western Seoul, and transferred the infection to him. The co-worker’s daughter has also contracted the virus. The first infected person did not wear a face mask and spread droplets in the noraebang, which became a key site for the spread of Covid-19. In 2004, Inoue received the Ig Nobel Prize for peace, a parody prize of the Nobel Prize. He was chosen for attaining peaceful coexistence by “providing an entirely new way for people to learn to tolerate each other.”

Regardless of the skill level, it takes tolerance to listen to other people singing. If you display the patience a bit more, you can get over the inconvenience of social distancing. Let’s save clubbing and noraebang singing for now for the days when we can all sing and dance more cheerfully.

A reinvention of karaoke bars (KOR)