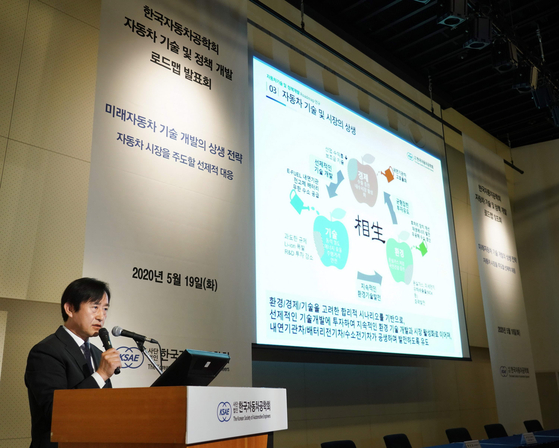 Bae Choong-sik, vice president of the Korean Society of Automotive Engineers, speaks at a seminar Tuesday in central Seoul.

Vehicles that run on internal combustion engines may have a longer future thanks to the coronavirus pandemic.


Emission-belching models have come to be considered public enemies as evidenced by the growing number of countries trying to ban their sales after 2035 due to their contribution in air pollution, including Britain.

Auto experts in Korea, however, think the jolt to the global economy by the coronavirus may extend the life of internal combustion engines, which are still much cheaper and more popular than more eco-friendly models.

Profits from the sale of traditional cars could be redirected to research and development of eco-friendly engines that range from lithium-ion batteries, fuel-cell batteries and, maybe in the future, cars that run on solid state batteries.

“The number of businesses linked to the internal combustion engine is far higher than that of electric vehicles, which means this industry can hire more people and make more money,” said Lee Ki-hyung, a professor at Hanyang University’s mechanical engineering department at a seminar held Tuesday by the Korean Society of Automotive Engineers (KSAE) in central Seoul.

“In the aftermath of Covid-19, the finances of auto companies around the world has deteriorated," he continued. "At least for the next five years, the role of internal combustion engine-equipped vehicles will become more important to act as cash cows.”

“There are predictions that sales of electric vehicles will not increase as fast, and some carmakers are discreetly returning to work on internal-combustion engines,” Lee said.

In fact, sales of domestic carmakers' lithium-ion battery-powered electric vehicles in Korea only rose by 0.8 percent in 2019 compared to the year before despite all-out effort by the government to promote a zero-emissions society. Hybrid vehicles that still rely on gasoline engines lead the sales of eco-friendly vehicles last year going from 62,136 to 75,966.

The aggressive subsidies offered by the government for purchases of new kinds of eco-friendly cars should also be revised, speakers said.

“The government has drawn up a plan to sell an accumulated 30 million [lithium-ion battery-powered] electric vehicles and 850,000 hydrogen vehicles by 2030 with the objective of two types of electric vehicle to account for 33 percent of new car sales,” said Bae Choong-sik, a mechanical engineering professor at KAIST and vice president of the KSAE.

Bae said the current subsidy plan sounds too optimistic considering the effect of the coronavirus pandemic on the economy and the nation's finances. It will also dent the average person's ability to buy a new car.

“Korea’s subsidy plan for eco-friendly fuels is relatively high compared to other countries but their sales account for a mere 0.3 percent of new car sales as of 2016, meaning that subsidy plan is not working as it should,” said Hwang Sung-ho, a professor of engineering at Sungkyunkwan University.

“A more intricate analysis into Korea’s electric vehicle subsidy program is needed in order to better distribute the fund into other sectors such as into research and development ranging from batteries, motors, powertrains, charging infrastructure and more.”