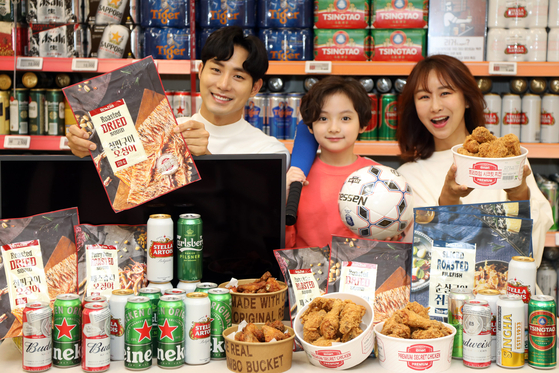 Models pose for promotional snacks that will be offered at Emart for a week from May 21 through May 27. [EMART]


Sensing an opening after a recent cluster of coronavirus infections in Seoul, major retail companies are promoting beverages and snacks for people spending more time at home.


Emart on Tuesday announced sales on chicken and snacks, like dried tilefish and cuttlefish, in time for professional baseball games that started earlier this month. With no audiences in the stands, Emart is targeting people watching sports games at home. The promotion lasts a week from May 21 through May 27.

Boxes of fried chicken and dried snacks are 30 percent off if they are purchased together with imported beer, which costs 9,400 won ($7.70) for four cans. A box of fried chicken will cost below 10,000 won.

For 32-inch televisions, there is a 12 percent discount, bringing the price down to 159,000 won. Emart also introduced fitness equipment such as the X-Bike and sports mats earlier this year as more people work out at home.

“The popularity of indoor hobby and leisure equipment is projected to continue for some time,” said Choi Hoon-hak, a spokesperson for Emart.

The company announced Tuesday it will introduce four types of roasted coffee beans at Lotte Mart in collaboration with Ediya Coffee. They will hit the shelves on May 22 and June 18.

The beans are from Ethiopia, Columbia, Kenya and Brazil. The company said it was responding to more demand from people making their own coffee.

Social distancing appeared to be reflected in the recent sales of meal replacements such as dosirak, or lunch boxes, at convenience store chain CU.

CU said Tuesday that sales of meal replacements, like gimbap, or seaweed rice rolls, hamburgers and sandwiches, grew by 22.6 percent from May 4 through May 15, excluding the weekend, compared to the same period in the previous month.

Sales also got a boost from the government’s relief funds distributed earlier this month, the company said. The relief funds can be used at convenience stores.

“As the coronavirus reignited from the infections in Itaewon [in central Seoul], office workers are intensifying social distancing,” said Cho Sung-wook, a spokesperson for BGF Retail that operates CU.