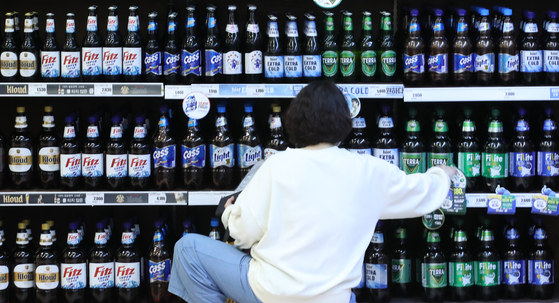 Beers displayed at a major store in downtown Seoul on Tuesday. The government — the Ministry of Economy and Finance and the National Tax Service — announced an easing of alcoholic drink regulations, which includes allowing manufacturers and retailers to sell alcoholic beverages through delivery services. Additionally, alcoholic beverages can be purchased via smartphone. There will no longer be a different label for those sold to ordinary customers to those sold to businesses such as restaurants and bars. Beer and traditional makgeolli makers are no longer required to report to the government when making changes to prices. Smaller alcoholic beverage manufacturers will be permitted to outsource their production to other companies to reduce their capital costs. The easing of regulations was introduced in order to help boost the competitiveness of the Korean alcoholic beverage industry, which has recently been losing ground to imported competition. [YONHAP]