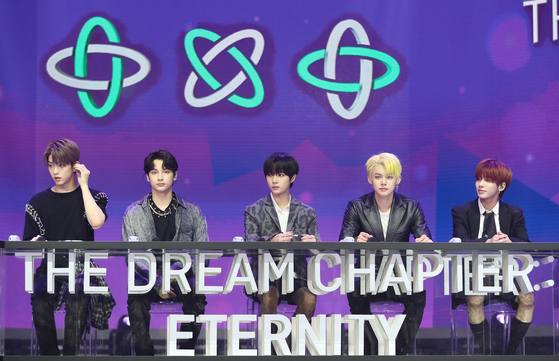 Tomorrow X Together in an online press conference in Seoul on Monday to mark the release of their second EP, "The Dream Chapter: Eternity." [PARK SE-WAN]

The latest EP from boy band Tomorrow X Together, also known as TXT, has hit the top of iTunes charts around the world within a day of its release.


“The Dream Chapter: Eternity,” released on Monday, was the No. 1 album in over 50 regions on Tuesday morning including the United States, Mexico, Brazil, Japan and France, according to Big Hit Entertainment, the band’s agency.

The EP's title song  “Can’t You See Me?” was also the No. 1 song on the iTunes charts in 10 regions on Tuesday morning.

“Eternity” is the band's second EP. The songs on the new EP follow the theme of youth, which has been common throughout its previous release. However the tracks on "Eternity" focus on some of the darker sides of being young. The boy band debuted in 2019 with its release “The Dream Chapter: Star” and released its first full-length album “The Dream Chapter: Magic” the same year.

The band stormed the K-pop scene last year by winning the Rookie of the Year award at 10 different award ceremonies.