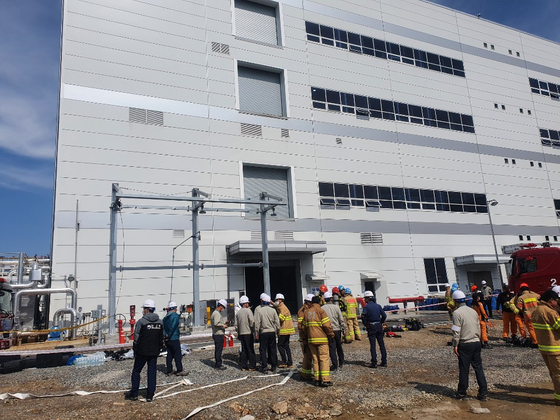 Firefighters work at LG Chem's catalyst lab in Seosan, South Chungcheong, after extinguishing a fire that killed one worker and injured two others on May 19, 2020. [YONHAP]


A fire at a research center of LG Chem killed one worker and injured two others Tuesday, firefighters said.


The blaze occurred at the company's catalyst lab in the central city of Seosan, some 120 kilometers (75 miles) south of Seoul, at around 2:20 p.m. Firefighters extinguished it at around 3:30 p.m.

One employee was killed and two others suffered second-degree burns to their faces and necks and were sent to a nearby hospital, they said.


The fire reportedly broke out when a catalyst, which was being transported, exploded under excessively high pressure. No harmful chemicals leaked, according to the local fire department.


The facility was immediately shut down.


Police and fire authorities will begin to investigate the cause of the accident as soon as they clear up the scene.


The accident came as the nation's leading chemicals company reels from a toxic gas leak at its plant in India on May 7, which killed 12 people and sickened more than a thousand people.