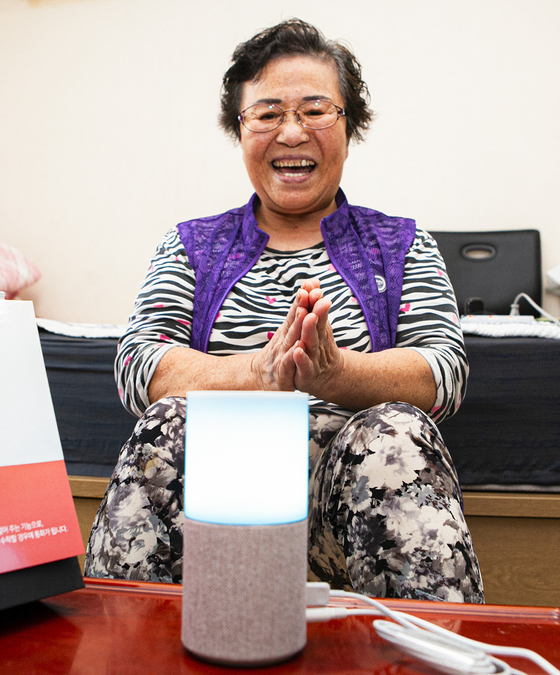 Artificial intelligence (AI) is frequently depicted as either a cutting-edge tool or an apocalyptic adversary. But SK Telecom prefers to brand machine-learning technology as a potential friend for isolated elderly people.

The mobile carrier announced preliminary results from an ongoing, year-long experiment that indicated the presence of an AI speaker can yield health and psychological benefits for elderly people living alone.

Beginning in April 2019, the company partnered with 15 regional governments to provide its AI speaker Nugu to about 3,200 of those people. Details of the experiment will be published next week in a medical thesis, SK said.

The speakers were installed with caretaker software that includes functions targeted to that specific group. SK deployed staff members to offer one-on-one training to use the speaker.

Most of the test subjects had weak internet connections, and 30 percent had never used a smartphone before. By the end of the year, 73.6 percent of the users said they talked to Nugu every day, according to a February survey of 670 people with an average age of 75.

The company said the speaker increased happiness, increased confidence with digital devices and decreased loneliness. Of the respondents, 22 percent said they were not talking to family members at all. According to SK, the positive indicators were more significant for cases where Nugu was the user’s first digital device.

“The happiness and loneliness factors were based on an analysis of the users’ words recorded on the speaker. From the point when Nugu was installed, we compared data from the first two months to the third and fourth months,” Kim Beom-soo, executive director of SK Telecom’s Barun ICT Research Center, said during an online press conference Wednesday.

The speaker also contributed to the rescue of 23 elderly people in dangerous emergencies. Spoken phrases like “save me” or “S O S” can send signals to SK Telecom’s ICT Care Center, which then confirms the situation is urgent before calling 119 for an ambulance.

During the year-long trial period, the company said that the speakers also helped improve linguistic abilities, long-term memory and concentration. Medically meaningful results were found among users that had engaged with Nugu’s quiz game, five days a week for two months, according to SK. The game was developed in partnership with a research team from Seoul National University Hospital.

The company also said that improvements made over eight weeks had the equivalent effect of delaying the progress of Alzheimer’s by two years.

Preventing Alzheimer’s will be key for SK Telecom developing the experiment into an actual product, which it plans to launch in the second half of 2020.

SK invested 3 billion won ($2.4 million) in the project last year, but hopes it will be able to sell caretaking Nugu speakers at an affordable price with government support.

“The original intent of regional governments having worked with us on the caretaking Nugu was to confirm the deaths of single living elderly people earlier. But our initiative goes beyond that to prevent lonely deaths,” said Lee Joon-ho, vice president and head of SK Telecom’s social value group during the Wednesday conference.

Since 2017, the Moon Jae-in administration has pushed a national program to support elderly Alzheimer’s patients, including investing in research and development of possible treatments and increasing clinics.

[NEWS IN FOCUS] Smart speakers are friends, not toys, to some Koreans