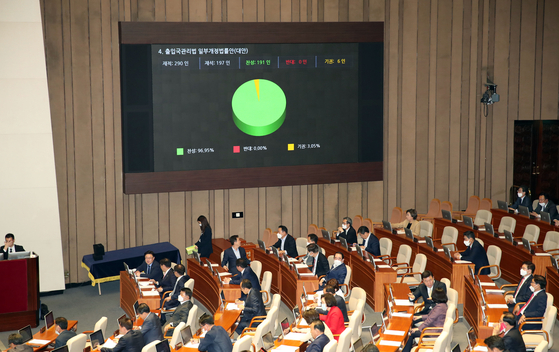 Lawmakers vote on an amendment to the Immigration Control Act at the final plenary session of the 20th National Assembly on May 20. [YONHAP]

The session, which officially expires on May 29, will be remembered as one of the most tumultuous and polarized in the nation’s history, having enacted the impeachment of a sitting president and, in one instance, erupted into violence over a series of controversial reform bills last year.

The 21st National Assembly, whose lawmakers were voted in with the general elections on April 15, will take office on May 30.

As if sensing the legacy they leave behind with these last four years, lawmakers across the aisle reached last-minute agreements in recent weeks to pass dozens of proposals held up for months.

One of these is a law allowing new investigations of several unresolved controversies in Korea’s recent history, including the massacres of civilians during the 1950-53 Korean War and a case involving human rights violations of thousands at a state welfare facility known as Brothers Home.

The push to re-examine the case of Brothers Home in particular gained momentum in recent years after former Prosecutor General Moon Moo-il publicly apologized on behalf of the government for the alleged cover-up conducted by the country’s authoritarian leaders in the 1980s.

Lawmakers in Wednesday’s plenary session were also due to vote on a series of supplementary laws cracking down on digital sex crimes in response to recent busts of major online illegal pornography rings.

To support a law passed earlier this month increasing the punishment for the manufacture, distribution, purchase and possession of pornography depicting exploited victims, the proposals voted on Wednesday will require Korea’s major portal sites like Naver and Daum to make technical adjustments to prevent such material from being advertised.

The Assembly was also due to pass a law that would allow the use of digital signatures so as to expedite online transactions and eliminate the use of online authorization certificates accredited by banks, which have been criticized for being difficult and cumbersome to use.

Another proposal passed Wednesday was an amendment to the Immigration Control Act that increased punishments for foreigners who fill in false records when entering the country.

The 20th National Assembly was set to go down as the least productive session in the past three decades, having passed only 36.4 percent of the 24,195 bills submitted. By contrast, the 19th session passed around 43 percent of its bills, the 18th 45 percent, the 17th 52 percent and the 16th, 66 percent.

The biggest reason for this lack of output was due to the fact that the 20th National Assembly was also one of the most fractured in recent memory, with no single party holding a majority of seats. The ruling Democratic Party (DP) — which started the session in opposition before Moon Jae-in won the presidency in 2017 — was forced to ally with minor parties that it had to placate with concessions in order to pass its legislative agendas.

Under this so-called “four-plus-one” alliance, the DP and its minor partners last year pushed through a series of prosecutorial and electoral reform bills, which provoked fierce opposition from the conservative Liberty Korea Party — the predecessor to the United Future Party — that erupted into violence at a plenary session in April.

But the 20th National Assembly’s most lasting legacy will be its impeachment of former President Park Geun-hye on Dec. 3, 2016. Overwhelming public outrage over a massive corruption scandal involving Park and her close confidante, Choi Soon-sil, even led members of her own party to defect and vote for her impeachment.

Park was removed from office with a unanimous Constitutional Court ruling on March 10, 2017, leading to an early presidential election that swept the liberals into power.