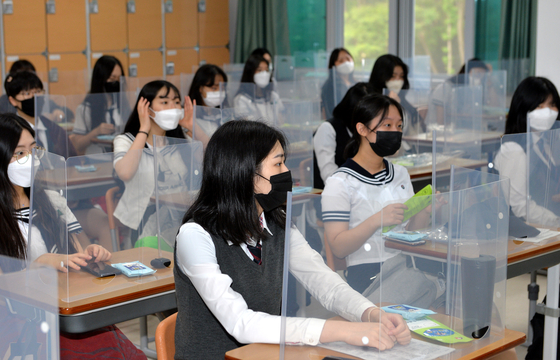 Seniors at Jeonmin High School in Daejeon sit at desks with plastic dividers on Wednesday. Schools reopened for the first time for high school seniors Wednesday since the coronavirus pandemic. [KIM SEONG-TAE]

Schools reopened for the first time since the coronavirus outbreak on Wednesday, starting with classes for high school seniors who were filled with both trepidation and excitement to finally be back with their peers after over two and a half months.


The return to physical classes for students comes some 80 days after their school year was supposed to have started on March 2.

Schools were a different sight from pre-coronavirus days, with students clad in masks lined up standing one meter (3.3 feet) apart as they entered the gates to get their temperatures checked. Teachers showed up early at the gates to reunite with their students — who they have only been seeing through online interactive classes which commenced last month.

Classes likewise were a changed landscape with some schools installing plastic dividers around desks as an extra barrier of protection, while other schools opted to space out desks. Some school cafeterias were installed with thermal imaging cameras, while others saw students eating behind makeshift panels and keeping up with social distancing measures.

Remote classes rolled out last month, but as Korea flattened the curve and eased its official social distancing campaign on May 6, quarantine authorities announced students would be able to head back to their campuses in a phased manner.

After five delays amid coronavirus concerns, including a postponement by one week because of a cluster of infections related to Itaewon clubs, high school seniors finally returned and will be followed by younger grades in three more batches through next month.

But the first day back to school didn’t all go smoothly, as 75 schools in Incheon and Gyeonggi were forced to suspend classes or immediately send students back home as precautionary measures.

In Incheon, 66 high schools in five of the city’s 10 districts and counties sent students back home before noon after two seniors in the area tested positive for the coronavirus early Wednesday. The two students, both 18-year-old seniors from the Michuhol District, had visited a coin karaoke facility on May 6 with another Covid-19 positive student who had contact with a hagwon (private academy) instructor from Incheon who was infected after visiting a club in Itaewon-dong in central Seoul.

Similarly, all nine high schools in Anseong, Gyeonggi, also temporarily suspended classes because a club-related patient was found in the area. The Anseong city government made the decision because they were not able to completely trace the movement of this 28-year-old patient.

Some schools quickly wrapped up classes after being informed by Incheon education authorities of the two new cases, leaving students who had finally reunited with their friends after months disappointed and parents full of anxiety.

The Incheon Metropolitan Office of Education likewise said that the decision was made following consultations with quarantine officials over concerns of further infections because the students may have used facilities frequented by many people. The Incheon education authorities said that the 66 Incheon schools will hold remote classes through Friday.

Classes in major cities including Seoul and Busan proceeded relatively smoothly through the afternoon.

The Education Ministry said that the National Union Academic Evaluation for schools other than those that have suspended classes in Incheon will be able to continue as planned Thursday.

But teachers, students and parents have struggled with the limitations of remote learning over the past weeks.

The students in lower grades are set to return to school in three batches by June 8, including kindergartners. Yet, as more grades start classes in coming weeks, there is public concern whether lifestyle quarantine measures and the spacing out of students will be maintained.

Some parents are already concerned about their children returning to classes amid continued Covid-19 cases and criticized the Education Ministry for reopening schools too early. A Blue House petition to delay the reopening of schools has garnered over 239,000 signatures. There are concerns that schools may be forced to suspend classes suddenly in the future, especially with more students set to return in the coming weeks.

Others are concerned that high school seniors will be set back further on their preparations for college entrance despite the annual state-administered College Scholastic Ability Test, or CSAT, usually held in November, having been postponed to Dec. 3.

A 48-year-old mom of a high school senior surnamed Park living in Gangnam District, southern Seoul, told the JoongAng Ilbo Wednesday, “Daechi-dong in Gangnam is the center for hagwon, and it’s worrisome that there can be contact between many students from other schools. In the case there is a single infection in one school, classes for students in the entire region may be suspended.”