A Covid-19 hot spot at Samsung Medical Center (SMC) in Gangnam District, southern Seoul, appears to be under control after four nurses tested positive earlier this week, but the cluster of infections that began in nightclubs in Itaewon-dong, central Seoul, two weeks ago continues to grow.

Nearly 1,200 people who had contact with the nurses, including SMC medical professionals, patients and their guardians, were tested. Among those who received their results, no other person has been infected with the coronavirus, authorities said.

In contrast, several new infections were reported in connection to the Itaewon cluster Wednesday, as officials from the Korea Centers for Disease Control and Prevention (KCDC) announced a total of 196 cases by noon, up by nine from Tuesday noon. The figure is a significant drop from last week, when 20 to 30 new cases were being reported on a daily basis.

Most of the latest cases contracted the disease from acquaintances who partied in Itaewon, rather than actually going to the neighborhood themselves. 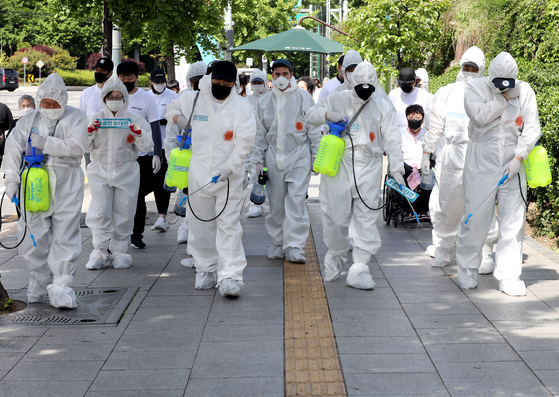 Business owners in Itaewon-dong, central Seoul, spray disinfectant on the streets of Itaewon Wednesday as a cluster of infections linked to the area’s nightclubs and bars continues to swell. [NEWS1]

The Itaewon cluster had 119 patients from May 6 — when the first patient was identified — to May 13 noon, of whom 76 were people who visited a club and/or bar in Itaewon, while the remaining 43 people got infected after contacting those 76.

The first person to have tested positive in the Itaewon cluster was a 29-year-old man in Yongin, Gyeonggi, who received his results on May 6 after visiting five different clubs and bars: King Club, Queen, Soho, Trunk and H.I.M. Other clubs and bars in Itaewon that were visited by Covid-19 patients were Pink Elephant, Pistil, Made and Fountain.

“The Itaewon cluster hasn’t led to any huge mass infections since the first patient was detected on May 6, but we’re still seeing new patients” on a daily basis, Kim said Wednesday in a press briefing.

So far, Anyang and Gunpo, both in Gyeonggi, and Incheon have been mentioned as potential Covid-19 hot spots with apparent links to the Itaewon cluster. 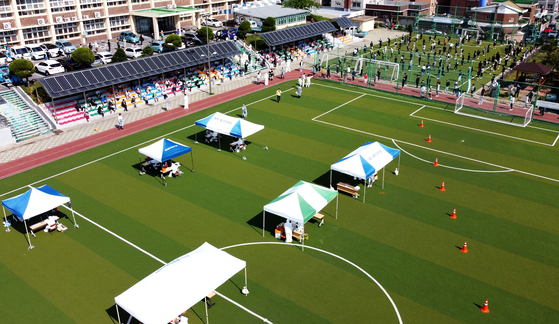 Incheon citizens wait for Covid-19 testing Wednesday on a soccer field in Michuhol District. Almost all recent coronavirus cases coming from Incheon have been traced to a private cram school instructor who partied in a club in Itaewon-dong, central Seoul, earlier this month. [NEWS1]

For Gunpo, the KCDC warned of a pub named Yosuljan and an internet gaming cafe named Four Season PC Bang as possible hot spots, recommending anyone who visited those places on May 12 or May 13 to get tested.

Recent infections in Incheon were almost all from a 25-year-old hagwon instructor in Yonghyeon-dong, Michuhol District, who visited King Club in Itaewon early this month. The sub-cluster traced to the instructor, who’s a Korean national and also a college student, rose to 27 Wednesday, up by five from the previous day.

Among the latest cases linked to the instructor were a 49-year-old taxi driver and his 17-year-old son who visited Top Coin Noraebang on the second floor of Vision Plaza in Michuhol District. The singing room was previously visited by a 17-year-old high school student who contracted the coronavirus after attending the instructor’s class.

The cab driver’s wife, a 46-year-old woman who tutors several kids, also came down with Covid-19. Health officials Wednesday said they were running virus tests on her students.

A 17-year-old boy who visited a PC bang (internet cafe) on the 11th floor of  Vision Plaza also got infected, and epidemiologists believe he contracted the virus from the building’s elevator.

In Anyang, at least six Covid-19 cases were traced to Jakuwa, a Japanese bar. Health officials surmise that a man in his 20s who lives in Gunpo spread the virus there after visiting a club in Itaewon.

Among the patients linked to Jakuwa was a 28-year-old man in Anseong, Gyeonggi, who received his positive test results Tuesday, a day before high school seniors were about to go to school for the first time since the coronavirus outbreak. Anseong education officials tentatively decided to postpone the start of normal classes by a single day, allowing high school seniors in the city to go to school starting Thursday. The patient lives near schools. 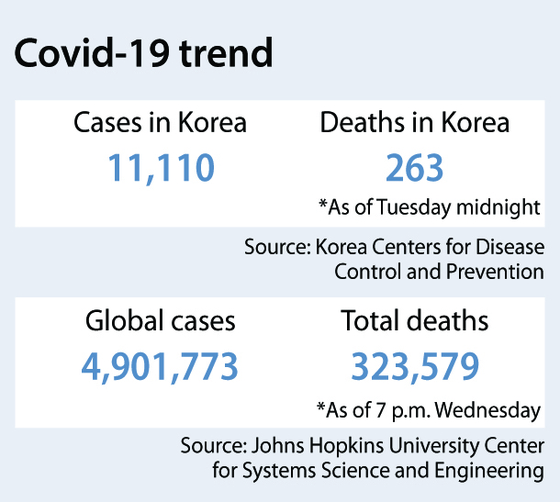 High school seniors at 66 schools in five districts in Incheon were also forced to go home shortly before lunch Wednesday after two high school seniors in the vicinity received positive test results that morning following visits to Top Coin Noraebang. Incheon education officials said they would discuss when to allow the schools to reopen.

Korea added 32 new cases of the coronavirus Tuesday, eight of which were imported, bringing the country’s total case load to 11,110. By Tuesday midnight, 263 people had died, the same as the day before, while 10,066 people have been declared fully recovered, up by 128 from the previous day.