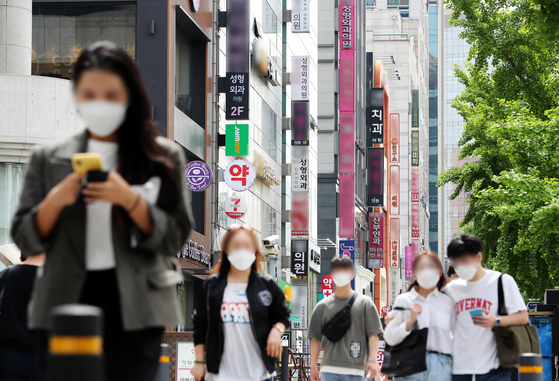 Plastic surgery clinics were one of the beneficiaries during the Covid-19 pandemic in Korea in the first quarter of 2020. [NEWS1]


The economy wasn't completely gutted during the Covid-19 outbreak.

As most businesses were reeling, bicycles and luxury cars were selling well, some convenience stores did brisk business and plastic surgery clinics and animal hospitals were experiencing a mini boom.

This is according to the Hana Institute of Finance, which analyzed Hana Card cardholder spending data in the first quarter of 2020.

The research issued Thursday indicates that internet shopping grew 41 percent year-on-year in the first quarter, while home shopping — buying products by phone advertised on commercials and infomercials — was up 15 percent.

In the meantime, the offline world was suffering.

Transactions at outlet malls dropped by 31 percent year-on-year in the first three months of the year, followed by electronics stores, with a 29 percent decline, and department stores, with a 23 percent drop.

It was a disaster for buffet restaurants, with sales down 64 percent in March on year, while sales at Western- and Japanese-style restaurants declined 38 percent. The bar business declined 30 percent on year, according to the data.

Medicine suffered, as people opted to stay away from hospitals and clinics during the pandemic, but sales at plastic surgery clinics rose by 9 percent and veterinary hospitals 6 percent.

Social distancing, mask wearing and working from home were perfect for those who wanted to get a little work done on the sly.

Purchases of domestic cars rose by 9 percent in March compared to the same period a year earlier, while sales fell in the first two months of the year. Purchases of imported vehicles jumped by 12 percent year-on-year in March.

Sales of bicycles jumped 69 percent year-on-year in March, following a 36 percent jump the previous month. In January, however, when the coronavirus had yet to hit Korea, sales dropped by 4 percent.

“Consumer sentiment is still dire, and the recently distributed emergency disaster funds will be used to buy necessities and groceries,” said Jung Hoon, a researcher from Hana Institute of Finance. “A recovery in many industries seems highly unlikely, especially in the travel, airline, accommodation and leisure sectors experiencing minus growth.”