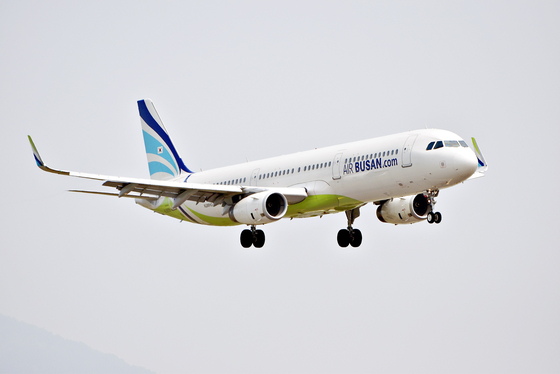 
After the coronavirus outbreak all but shut down international travel, some of Korea's budget airlines are beginning to reopen overseas routes, with Air Busan announcing Thursday it will end a four-month freeze on those flights in July.

The company, which flew its last international flight to Narita, Japan, on March 8, will fly Busan-Hong Kong and Busan-Macau routes starting on July 1. The airline hopes to gradually resume international routes, with a flight to Vietnam to be added on July 15.

“The spread of Covid-19 has come to a state of lull, but we are injecting all our capacities to follow safety measures and plan to announce additional preventive measures [against Covid-19],” the airline said in a statement.

Air Busan, which is 44.17 percent owned by Asiana Airlines, was preparing to resume international flights in June, but had to push the date due to the continuous spread of the coronavirus. It also expects the foreign entry ban to be somewhat eased by July.

Air Busan is offering promotions and not charging for ticket refunds or date rescheduling to ease concerns from travelers worried about how unexpected changes in the pandemic's spread may affect their plans in July. One-way flights to Japan, for instance, cost 35,000 won ($28).

“Providing a ticket for that price is a loss for us,” said Park Jin-woo, a spokesperson for Air Busan. “But we believe pre-emptively raising the demand to travel is more important.”

Jin Air, another budget carrier 60 percent owned by Hanjin KAL, said it is still discussing plans to resume international routes internally. It flew its last overseas flight, from Jeju to Xi'an, on Feb. 2.

“We haven’t finalized the date of resuming international flights since the external environment hasn’t yet been settled,” Kim Dong-hwan, a spokesperson for Jin Air, said . “At this point we can operate outbound flights from countries like Vietnam, but can’t carry people into the countries due to restrictions. China, [which banned the entry of foreigners], seems to be inclined towards easing the restrictions, but nothing specific has been confirmed. So we’re still reviewing the situations.”

T’way Air is likewise waiting before it returns to international flights. The budget carrier will continue to focus on domestic flights at least through the end of June, according to Park Ki-ryung, a spokesperson for T’way Air.

T’way Air, which used to fly 48 international routes, has halted those flights since mid-March.

And Jeju Air, which currently flies to Tokyo and Osaka in Japan and Weihai in China, said it plans to resume flight to Manila in June. While China has banned foreign visitors, flights returning Chinese citizens to the country are still allowed to enter.

The budget airline, which flew 82 routes as of late last year, continued to operate international flights although the number shrank greatly.

“Things are tough due to the coronavirus, but we still want to fly,” said Yeom Seung-hwan, a spokesperson for Jeju Air. “Apart from the plan to resume the Manila route in June, we’re still internally discussing when to resume more international flights.”