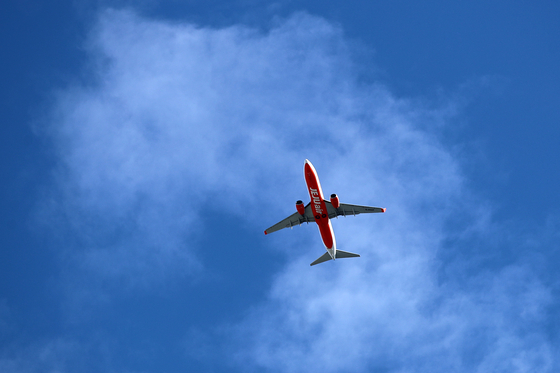 
Jeju Air's planned $140 million stock offering is just a stopgap measure that will only give the airline funds enough to stay aloft a few more months — the company saying that the equity sale is “the best we could do.”


On Thursday, the airline, which is 56.94 percent owned by AK Holdings, reported in a regulatory filing that it is issuing 12.14 million common shares worth around 170 billion won ($138 million). Its current market capitalization is 511.3 billion won.

“Jeju Air will be able to put out the urgent fire with the issuance of new stock, but its performance could vary largely depending on when the Covid-19 outbreak settles,” wrote analyst Kim Gwan-hyo from Hi Investment & Securities in a report Friday. “Considering that it is in the process of acquiring Eastar Jet, its financial situation could deteriorate rapidly if the recovery from the Covid-19 is delayed.”

The new shares, which will be listed on the Korea Exchange on August 4, are to be sold at about 14,000 won each — the company’s shares traded 19,400 on Friday, down 1.02 percent. The final price will be set on July 9, and the selling of the equity will begin July 14.

AK Holdings on Friday confirmed that it will be a participant in Jeju Air’s new stock offering. Details of the share purchase will be concluded during a board meeting scheduled in mid-June.

“We can’t confirm how long we’ll be able to sustain business through the issuance of the new stock because it will vary depending on how the coronavirus develops,” said Yeom Seung-hwan, a spokesperson for Jeju Air. “But we can assure that we did the best we could do.”

As of the end of the first quarter, Jeju Air had 68 billion won in cash and cash equivalents. Its monthly fixed cost used to exceed 50 billion won, but the figure is now down to 30 billion and 40 billion won due to lease forbearance and employee leave, according to analyst Ryu Je-hyeon from Mirae Asset Daewoo.

“Even considering the reduced cost, its cash and cash equivalents are projected to be mostly exhausted by the end of the second quarter.” Ryu added, “The decline rate of sales is projected to be reduced starting in the third quarter, but if the travel restrictions continue like the current situation throughout the end of the year, [Jeju Air] may need to secure additional funds.”

Of the 3,285 Jeju Air employees as of the end of first quarter, 70 percent of them are on paid leave. The airline currently only operates three international routes: Tokyo and Osaka in Japan and Weihai in China. It flew 82 overseas routes as of late last year.

Due to the crisis faced by the aviation industry, its deal to acquire money-bleeding Eastar Jet is raising concern.

According to local press reports, Jeju Air requested Eastar Holdings, 39.6 percent owner of Eastar Jet, revise the conditions of stock purchase agreement due to the its liquidity issues.

Eastar Jet halted international fights in March. They are scheduled to resume on June 30. The budget carrier halted domestic flights in April and recently pushed back the resumption of domestic flights to June 25 from the originally scheduled late May.

Jeju Air agreed in March to acquire 51.17 percent of Eastar Jet for 54.5 billion won. Both airlines neither confirmed nor denied Jeju Air’s demand to revise the stock purchase agreement.

“We can’t confirm the details of the contract because they are confidential,” said Yeom from Jeju Air. Yoo Yeon-su, a spokesperson for Eastar Jet, said the same.

For the acquisition to go through, the deal needs to win the approval from Thai and Vietnamese authorities. Neither has given the green light yet.

"Jeju Air is expected to pull off the acquisition because it has AK Holdings behind its back, which even bet on acquiring [much bigger] Asiana Airlines," said Prof. Hur Hee-young, who teaches business at Korea Aerospace University. "Also, the demand to revise stock purchase agreement doesn't reflect Jeju Air's will not to acquire Eastar Jet."

Eastar Holdings is fully owned by children of Rep. Lee Sang-jik, the Democratic Party's lawmaker-elect for Jeonju B District.