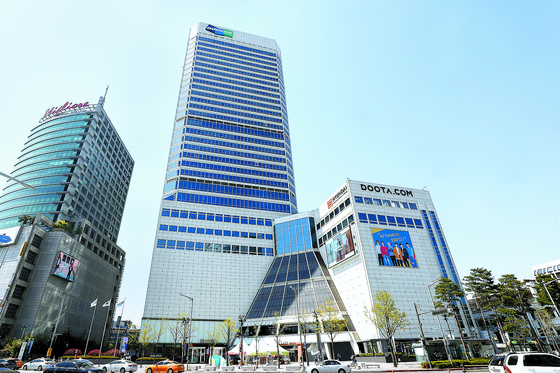 Doosan tower located in Jung-district, central Seoul. Doosan Group is currently in negotiation with Mastern Investment Management for the sale of Dongdaemun Doota, which has served as the group's headquarters.[YONHAP]


Large companies are dumping properties to raise cash as they struggle with liquidity issues in the Covid-19 hobbled economy. Already 4 trillion won ($3.2 billion) worth of real estate has been moved or is on the block.

One industry official, who requested anonymity, said as there’s limited land for development in Seoul, there’s a fierce competition in trying to buy properties coming into the market. This competition is driving up the prices. 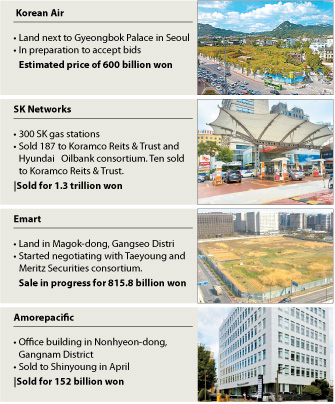 SK Networks has put up 300 gas stations for sale in a move to improve its financial structure. GS E&C’s subsidiary Xi S&D bought five of the gas stations from SK Networks for 70 billion won. Xi S&D plans to build a knowledge industry center and so-called officetel spaces on some of the newly purchased real estate.

“Among the gas stations in Seoul, some are in good locations sitting next to large roads where the vehicle entry is convenient,” said Kim Yeon-hwa, head of the real estate department at IBK. “Developing for-profit real estate that generates rent instead of gas stations, whose profit has shrunk due to excessive competition, is popular.”

Emart has put up 39,050 square meters (420,330 square feet) of land near Magok subway station in Gangseo District, western Seoul, for sale. The retailer first purchased the land for 243 billion won in 2013 and was planning to build a Starfield mall. The company has been hit hard by the coronavirus outbreak.

Competition for the property was heated as not only is the land large but it is also in a good location. A consortium led by the construction company Taeyoung, known for its brand Desian, was selected as the primary bidder after proposing 815.8 billion won for the land. The offer was over 200 billion won more than market expectations of 600 billion won.

Taeyoung in a statement said it is considering the construction of a multipurpose complex with offices, stores and cultural facilities. Parts of the building will be rented to Emart for their warehouse-like stores.

Major landmark buildings are also being sold by groups seeking to firm up balance sheets.

Doosan Group is currently in negotiation with Mastern Investment Management for the sale of Dongdaemun Doota, which has served as the group's headquarters. The building is a landmark structure in the fashion hub of Seoul and is being put on the market due to the group's liquidity crunch.

The building is seen going for between 700 and 800 billion won.

Amorepacific sold its office building in Nonhyeon-dong in Gangnam District, southern Seoul, to Shinyoung, a real estate developer, last month for 152 billion won. The building, which used to be the headquarters of the cosmetic company, was leased since 2017 after Amorepacific’s new headquarters in Yongsan District, central Seoul, was completed in 2017.

Hyundai Steel recently sold off its office in Jamwon-dong, Gangnam District. Hyundai Engineering, which managed the sale, said the steel manufacturer decided to sell the office building to improve its finances. Hyundai Engineering said it could not disclose when that sale was made or how much the building was sold for.

“If more real estate rolls out, it wouldn’t be easy for the previous owner to find a buyer that would meet their preference,” said an industry source, who requested anonymity. “For developers, they will likely flock to properties that will guarantee profits as the uncertainty of the coronavirus continues to grow.”