The Korea Exchange (KRX) recorded a grand total of zero initial public offerings (IPOs) in April, as the coronavirus outbreak slowed the economy and scared off investors as stock prices crashed in March.


Volatility seems to be on the wane, at least for now. The Kospi, which crashed below 1,500 in March, recovered back to 2,000 on May 21. The Kosdaq has been on a winning streak for four days running, reaching 714 on May 21, the highest since last June.


With the numbers starting to tick up nicely, the IPO market is showing signs of life. 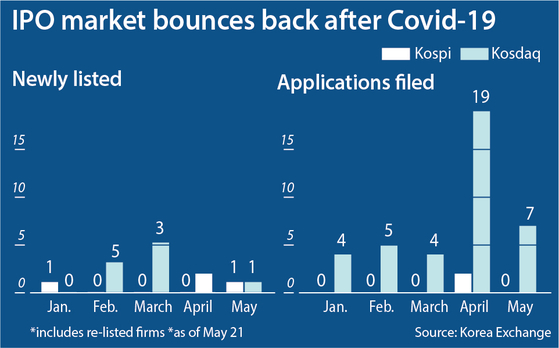 According to KRX data, 19 companies applied for listing on the Kosdaq in April, up from four in March. In May, seven companies have so far applied for evaluation.


Last week, the first listing since the April lull was achieved. Contract research organization DreamCIS was approved by KRX on May 20 to go public in the secondary market. Investors were enthusiastic. The sale was oversubscribed 660 to 1, and a total of 1.3 trillion won ($1 billion) was collected in deposits. In its first trading day on May 22, it traded at the 28,000-won level, far above the offering of 14,900 won.


"Companies which were planning for book building in May and April all withdrew their plans, most of which took place around March 19 when the index was hitting the bottom," said Choi Jong-kyung, a researcher at Heungkuk Securities. "It was a pity that most of the applying companies were in their last stages of going public, even after finishing their book building."

The outbreak has shifted perceptions about what would be hot in the IPO market, with "untact" — or no contact — and biologics plays getting attention.


“With the rise in demand for untact services during the coronavirus period, companies that engage in this area of business will be boosted in value,” said Lee So-joong, analyst at SK Securities. “Health care, e-commerce and online platforms, for example, fall in the untact category. With the latest pledge by the government to fortify untact services, ranging from medical care to online education, the IPO market in the latter half of this year is expected to be dominated by keywords related to untact.”


Until the beginning of this year, companies that specialize in material, components and equipment took center stage. This includes KCC Glass and Daeduck Electronics.


Of the planned IPOs this year, the most imminent big fish is SK Biopharmaceuticals, a drug developing subsidiary of SK Holdings, which recently announced that it would go public in July in a bid to raise approximately 1 trillion won.


TMON recorded its first-ever monthly profit in March, as online shopping grew rapidly during the peak times of the pandemic. It named Mirae Asset Daewoo as the underwriter of an IPO of its shares in April.


Kakao Bank enjoyed a near-tripling in its operating profit in the first quarter of the year due to rising demand for online money transactions. It said it would initiate the IPO process in the latter part of the year.


"The Korea Exchange is showing strong determination to invigorate the IPO market as shown in its rare approval of five companies at once to go public back on March 26," said Choi from Heungkuk Securities. "It would not be as impressive as what was expected in the beginning of this year, but the number of applications and evaluation approval cases are exceeding the average figure. If companies that had withdrawn recoup their will, the market will make a quick recovery in the second half."