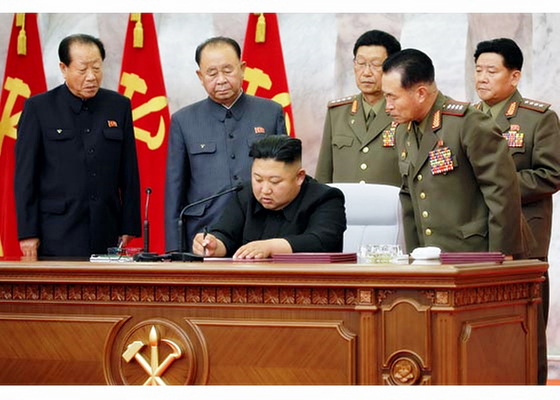 This marked Kim’s first public appearance in some 22 days.

The North’s official Korean Central News Agency (KCNA) reported, “Set forth at the meeting were new policies for further increasing the nuclear war deterrence of the country and putting the strategic armed forces on a high alert operation in line with the general requirements for the building and development of the armed forces of the country.”

It also reported that “crucial measures for considerably increasing the firepower strike ability of the artillery pieces of the Korean People's Army” were taken at this meeting.

The report didn’t further elaborate on the exact policies to increase such nuclear deterrence and artillery strike capabilities.

Kim last presided over an “enlarged meeting” of the Central Military Commission, North Korea’s top military-governing body, some five months ago on Dec. 22.

Kim was last reported in North Korean state media on May 2 visiting a ribbon-cutting ceremony for a fertilizer factory in Sunchon, South Pyongan Province. Prior to that, he had been out of the public eye for some three weeks, which spurred various speculations on the state of his health. His disappearance in recent weeks again prompted rumors on his well-being, but Kim appeared in good health and without problems moving around in a series of photographs released Sunday by North Korean state media.

This meeting appeared to set internal military policy amid a continued deadlock in denuclearization talks with the United States and the coronavirus pandemic which has prompted North Korea to implement strict quarantine measures for over four months.

After a four-day meeting of the Workers’ Party Central Committee at the end of last year, Kim said the North no longer felt bound by its self-imposed moratorium on testing nuclear weapons and long-range ballistic missiles. He also warned of a new strategic weapon in development “in the near future.” However, Pyongyang has made little public reference to such nuclear armament or deterrence this year.

Denuclearization negotiations with Washington, which have resulted in a halt in nuclear and long-range missile tests since late 2017, have been at an impasse since the second summit between Kim and U.S. President Donald Trump collapsed in Hanoi, Vietnam, in February 2019. The two leaders had a brief impromptu reunion last June at the demilitarized zone at the inter-Korean border and working-level talks were held in Stockholm last October, but little progress has been made since.

Thus, analysts are paying attention to Kim’s messaging as he raises the military card and appears to be focused on expanding his country’s nuclear and missile capabilities through this meeting.

The KCNA said that the meeting discussed military steps and political measures “to further bolster” the armed forces of the Democratic People’s Republic of Korea, or DPRK, “to be able to firmly defend the political stability and sovereignty of the country” against “hostile forces” and to develop “national defense capabilities and war deterrents.”

Kim also promoted on Saturday some 100 military officials. Pak Jong-chon, a career military commander specializing in artillery and missile forces, was promoted to a vice marshal in a rare move.

Previously, Pak was promoted to a four-star general and chief of the general staff of the North Korean People’s Army last September and a full member of the Workers’ Party’s Politburo in April. Pak has been spotted closely accompanying Kim at missile tests and on a horse ride up Mount Paektu last December, and was photographed by his side as the young leader signed the order Saturday, also covered on the front page of the state-run Rodong Sinmun Sunday.