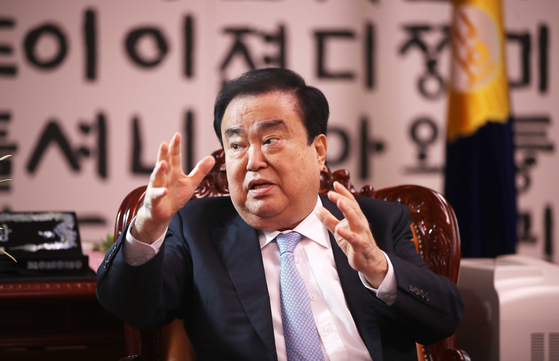 Moon Hee-sang, outgoing speaker of the National Assembly, conducts an interview with the JoongAng Ilbo on May 4 in his office. [OH JONG-TAEK]


By the time President Moon Jae-in was first dipping his toes into politics in 2003 after working as a human rights lawyer, Moon Hee-sang was already a familiar face in Korean politics.

The 75-year-old politician is set to step down from his current position as Speaker of the National Assembly, with a new legislative session beginning May 30, and has stated he will retire from politics as well.

When former President Roh Moo-hyun was considering Moon Jae-in as his senior secretary for civil affairs in 2003, it was Moon Hee-sang, then the president's chief of staff, who opposed the appointment, advising Roh that Moon Jae-in was too gentle for the position. Moon Jae-in was eventually appointed the post.

While presidents did not always listen to Moon Hee-sang’s advice, he never shied away from voicing his opinions. This held true throughout the three presidential administrations he had served and advised — whether he was serving as the senior political advisor to former President Kim Dae-jung, Chief of Staff to Roh or Speaker of the second half of the 20th National Assembly under President Moon Jae-in from July 2018.

Moon Hee-sang's retirement comes despite his admission that issues important to him have not yet reached a satisfactory conclusion.


In a May 4 interview with the JoongAng Ilbo, the outgoing speaker said that the Korean government and society is still far from resolving its pressing responsibilities, including issues ranging from the Korean-Japanese dispute regarding wartime victims to recent electoral reforms and the urgent need for a Constitutional amendment.

Q. You previously proposed a bill to create a foundation that will pay consolation money to Koreans who, during World War II, were forced to work in Japanese companies. The foundation would be funded through voluntary donations from Korean and Japanese companies, citizens and governments. But support groups for the victims rejected the bill on the basis that it does not include a formal apology from the Japanese government.

A. We still have time. [As of May 4] I have a month left until my retirement. I will not just stand idly by during this time.There are many who oppose this initiative.That is a useless effort. Tens of thousands of people desperately want this. It is just the representatives of civic groups and lawyers, involved in relevant lawsuits, who are against it.

Q. In your interview with Bloomberg in February 2019, you called upon then-Emperor Akihito of Japan to personally apologize to the Korean women who, during the colonial era, had been forced into sexual slavery in Japanese military brothels. This comment caused quite a stir in Japan.

A. I still stand by the spirit in which I made that comment. To be honest, I have been asked multiple times to try and find a way to bring Emperor Akihito to Korea. You could say the flood gates will open once this happens. If he comes to Korea and offers just one “I am sorry” to all the women [who were forced into sexual slavery before and during World War II], all problems will be solved. The situation has continued for too long, and we are in need of a moment that could touch the citizens of both countries.

I know this because Kim Bok-dong, a survivor of the wartime sexual slavery, once visited the National Assembly and gave her testimony. I was moved to tears when I heard her speak.
Kim said, “It is not money that I want. Even if I were given piles of cash, my mind will not be comforted. ‘I am sorry’ — just this one expression will be enough.”

Q. Prosecutorial reform was an important issue, especially under former President Kim Dae-jung's and President Roh Moo-hyun’s administrations. What was it like working for Kim?

A. At the beginning of the administration, Park Sang-cheon promised that he would reform the prosecutorial system within two months if he was appointed as Minister of Justice. But when he was actually given the position, he failed to carry out his promise and actually took the side of the prosecutors instead. I cannot express how disappointed I was in President Kim.

A. When I told former President Roh that I opposed the appointment, he cut me off, saying, “My word will become truth, so just follow along.” I argued that the position requires a willingness to use force when necessary, and even that may not be enough in itself. Moon was too kind of a person — you could see it in his eyes. But Roh stood by what he said, adding, “Moon is younger than me, but due to his wisdom, specifically in regard to his ability to predict future events, I cannot speak to him as if he is below me.”

Q. How did prosecutorial reform turn out under Roh’s administration?

A. Prosecutorial reform was not successfully carried out, and I think that this was why former President Roh passed away [Roh committed suicide a year after finishing his term as president]. I say this with a guilty conscience. Whether this is actually the true reason or not, I sincerely believe that this is why he passed away.
Q. The National Assembly was finally able to reform Korea’s electoral laws. But with everything going on with the satellite parties, do you not think that we have departed too far from the original vision that we had for the election system?

A. The main opposition party had no choice in the matter [of creating satellite parties], but this is something that the ruling party never should have done.
[The general vision we had for proportional representation] was not the most ideal of arrangements, but it had its own positive aspects. But the recent developments ... are a turn for the worse.  Polarization of the two parties and entrenchment of two-party rule is not desirable news.

Q. Did you express your discontent to the ruling party at that time?

A. There was no need for me to do that. There was one reason for their decision. They had to choose between duty and practical interests. They chose practical interests. Regardless, we have to fix the current electoral system.
Yes, this is obvious. The ruling party and the main opposition party need to correct the issue by reaching an agreement together. The two parties are partners together. This is an unavoidable fact. They are two parties working towards a shared destiny.
But if instead the two parties take delight in polarization, both parties will go for broke. History is unforgiving.

Q. In the general elections on April 15, the ruling party won a supermajority of 180 seats of the 300 seats available in the National Assembly. Did you predict that this will happen?

A. No, it was hard to make a prediction to that extent.

Q. Why do we need to go far as Constitutional reform?

A. I see the candlelight protests in late 2016 and early 2017 as having revolutionary meaning. The roar of the nation’s citizens has transformed the country’s politics. But it is vital that we institutionalize these changes. In the end, the Constitution is the king of all laws.

Q. What direction should the Constitutional amendment take?

A. Why did the candlelight demonstrations take place? Because an imperial president and covert powers held a monopoly over state affairs. As a result, fundamentally, we have to touch up the presidential system to prevent the president from wielding imperial powers. In order to do this, we should disperse the powers across the government. Horizontally, we should give more power to the cabinet. Vertically, we should give more power to local governments. A drastic transfer of power is necessary.

Q. Do you think that President Moon has any intention of reforming the Constitution?

Q. Then have you ever discussed the matter with him?

A. Well, he knows all of my ideas. I’ve talked to him through writing, through my books, multiple times.

Q. Any particular sentiments about your retirement?

A. I feel carefree on one end, hollow on the other. Former Prime Minister Kim Jong-pil once said that “politics is a hollow fruit.” I think I can relate to the expression now.