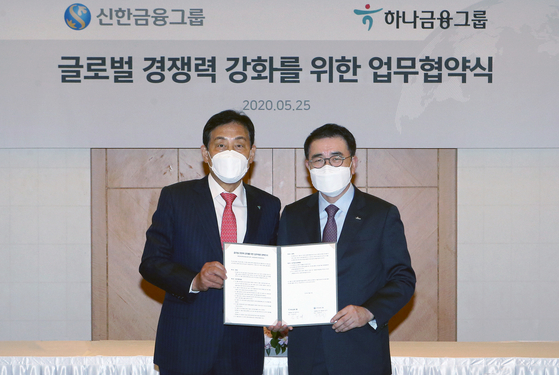 
Shinhan Financial Group and Hana Financial Group announced Monday they will work together to jointly expand their global business in an unprecedented move for two of the biggest players in Korea's highly-competitive financial market.

Shinhan, the No. 1 player in Korea by net profit, and Hana, the No. 3 player, said they have signed a memorandum of understanding on Monday to jointly foster competitiveness in their overseas businesses, which have not been as successful as expected. The possibility that the two groups would enter new markets or pursue mergers and acquisitions together was raised, but both companies said no specific details have been decided yet.

“Both groups are expected to fortify competitiveness to make a new breakthrough in the uncertain global financial market.”


Advancing into the overseas market has been a longstanding challenge for big players in Korea as the saturated domestic market can no longer provide new sources of profit. However, entry barriers to overseas financial industries have prevented rapid expansion in the global market.

Shinhan Financial Group, for example, hasn’t been able to expand into a new market for the past four years, although profitability has risen.

Its had advanced into 20 countries as of 2016, and the figure still stands at 20 as of February 2020, although the size of its network has increased from 165 locations to 221 over the cited period. Its profit-loss ratio was 9.5 percent in the first quarter of this year, up from 5.7 percent at the end of 2016.

“Domestic financial groups have rolled out diverse methods of investment to advance into the overseas market but haven't been able to overcome the concentration in certain specific regions and localization of network outside Korea, as well as stalling expansion,” the two financiers said in statements Monday.

“To overcome such shortcomings unnecessary competition should be removed, while working for qualitative growth and innovation through cooperative relationships should be pursued.”


Shinhan Financial Group’s overseas operations are largely concentrated on Southeast Asian countries such as Vietnam, Indonesia, Malaysia and Cambodia where its bank, card, investment and life insurance businesses all have a foothold.

“The latest agreement is expected to become a stepping stone for domestic financiers to go head-to-head with global financial groups in the future,” Kim Jung-tae, chairman of Hana Financial Group, said on Monday.