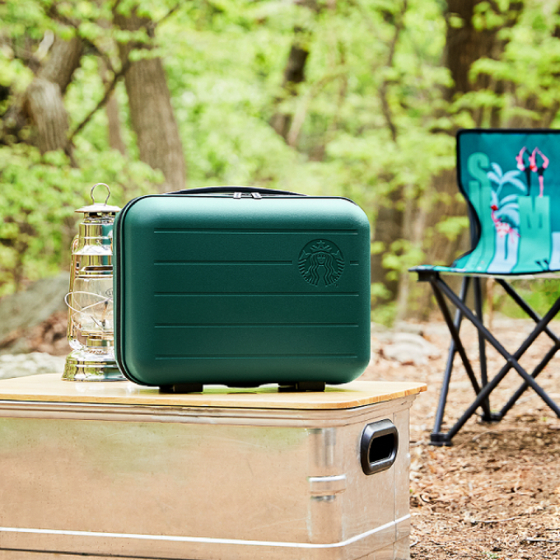 The e-frequency program is similar to the stamp-based loyalty schemes that a lot of cafes run, but rather than rewarding customers with a free coffee, Starbucks offers limited-edition merchandise.

Starbucks merchandise is always in high demand in Korea, and the exclusive e-frequency items are especially popular. This year, the hype seems to be reaching a whole new level.

On Saturday, one customer at a Starbucks branch in Yeouido, western Seoul, purchased 300 cups of coffee including 240 iced Americanos. The buyer reportedly drank a single cup and walked away with 17 “summer ready” bags — the hit item from this year's summer e-frequency campaign.

The remaining cups of coffee were left in the store with a note attached, saying “available for free,” but according to Starbucks Korea, around half of the purchased amount had to be thrown down the drain as nobody wanted them.

The infamous Yeouido sale took place just two days after this year's e-franchise event began. To complete the event, customers need to purchase a total of 17 drinks — including three premium options — before July 22. Successful customers can then choose a reward — either a small camping chair in a variety of designs or the popular "summer ready" bag — a small, hard plastic bag that looks like a miniature suitcase without wheels. Both items are engraved with the coffee chain’s iconic logo.

“It seems like the fact that they’re both camping items is also driving popularity,” said a Starbucks spokesman, referring to the recent popularity of camping as a hobby as Koreans increasingly turn to outdoor activities during the coronavirus pandemic.

“It wasn’t a timely decision to launch camping goods this summer. Item selection for seasonal items has to be done months before the actual event for manufacturing reasons, and, according to my knowledge, that was before the pandemic arrived,” he added.

The promotional event's original intent is to motivate customers to visit Starbucks throughout the summer. In reality, some users do the exact opposite — try and meet all the requirement in one visit. According to Starbucks Korea, there has been a spate of customers visiting branches with tumblers in their hands to order 17 drinks at once.

The cheapest way for a keen Starbucks fan to fill the 17 slots in one go is to buy 14 short Americanos or espressos and three summer edition beverages. This would still set them back a big 67,300 won ($54).

One motivation that drives Starbucks fans to hoard seasonal goods in the very first few days of the event’s launch is the fear that the item they want will run out. Seasonal merchandise normally comes in a few different color options, and the more popular versions are likely to run out. Last year, Starbucks offered a beach towel and demand was skewed toward a yellow and gray version which ran out much earlier than the other options.

The high demand is an opportunity for resellers. On Sunday, one online website for secondhand products had 300 posts selling this year’s summer merchandise. Prices ranged from 60,000 won to 90,000 won. Some deals were already closed. Other posters were offering to sell the e-frequency points, which can be sent from one user to another.

There’s not much Starbucks Korea can do to stop the resellers, but the company did say it has increased stocks of summer goods this year so customers that actually want the items have the opportunity.

“It’s different by store, but a lot of our branches are supplied with merchandise each day. At the moment, we have enough stock, so we’re not facing shortage issues,” the spokesman said.

“Near the event’s end, we’ll start disclosing real-time information about remaining merchandise at each store in our mobile app so as to reduce confusion for customers coming in at the last minute.”