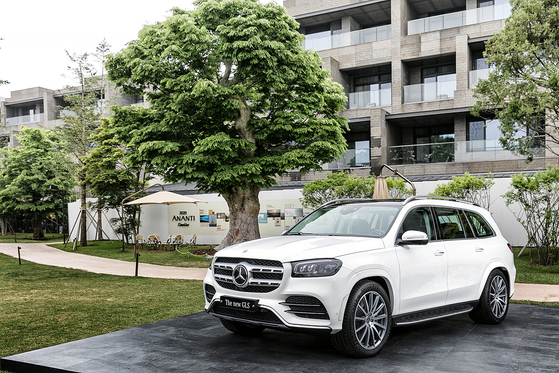 
GAPYEONG, Gyeonggi — Mercedes-Benz Korea is launching a fully revamped version of its large GLS SUV this summer to take on the small but popular market of seven-seater luxury SUVs that cost more than 100 million won ($80,000).


The third generation of the GLS unveiled Monday is larger and smarter than its predecessors thanks to its extended wheelbase and upgraded suspension software.

“The car comes with an abundance of space and enables the owner to pursue an active lifestyle,” Mark Raine, the vice president of Mercedes-Benz Korea’s product and marketing team, said at an unveiling event held in Gapyeong, Gyeonggi, on Monday.

The car’s wheelbase is 60 millimeters (2.36 inches) longer compared to the previous model — the second generation which launched in Korea in 2016 — extending its body and offering a more spacious interior. The second row of the vehicle has 87 millimeters more legroom as a result, according to the importer.

With off-road driving in mind, the new GLS is equipped with an Adaptive Damping System, where the suspension automatically adapts to road conditions to either soften or solidify the drive. The system is coupled with the automaker's E-Active Body Control, which adapts suspension settings depending on the driver’s choice of either comfort, curve or sports mode.

The new GLS is equipped with two types of engine: A V6 diesel engine or V8 petrol engine. The diesel-powered version will have a maximum horsepower of 330, while the petrol one goes up to 489.

When an import carmaker launches a new model in Korea, it needs approval from the Ministry of Environment for diesel emission and other fuel efficiency figures, while the Ministry of Transport checks the size and safety standards to meet domestic transport regulations.

Pre-orders for the luxury SUV are now open and the petrol-powered car will be available in June at the earliest. The timeline for the diesel version hasn’t been decided.

The luxury large SUV market in Korea has been growing rapidly recently. The segment used to be dominated by SUV-specializing labels such as Land Rover and Cadillac. BMW Korea brought the X7 Series to the market last year with prices starting from 124 million won, and Audi Korea also launched the Q8 SUV this year at 102 million won, both of which were the automakers' first large SUVs launched in Korea.