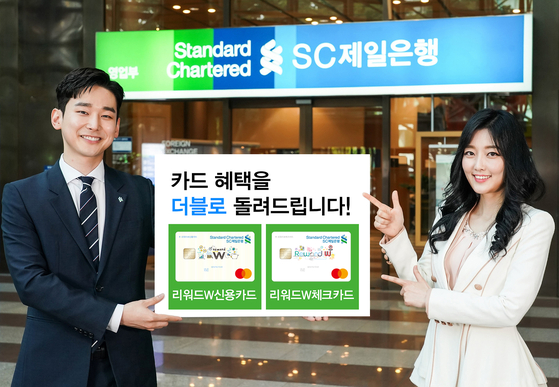 Users of both the Reward W credit card and the Reward W check card are awarded points depending on how much they spend. The credit card uses a system dubbed “360 reward points,” which are based on the amount of money spent and can be used in a variety of different ways.

The Reward W credit card offers points up to a maximum of 2.5 percent of the total amount spent, according to usage in domestic and overseas stores.

An additional 0.5 percent can be earned if the user passes the monthly points cap.

Cardholders will also receive other benefits including a 1,000 won discount on Netflix, Starbucks or taxi rides worth over 10,000 won.

The number of times the user receives this discount will also depend on spending the previous month, ranging from twice a month for cardholders spending between 500,000 won to 1.5 million won and up to 5 times for people spending more than 2.5 million won.

Unlike the credit card, the Reward W check card offers a maximum of 0.6 percent of spending in points.

In order to get a better return on points, cardholders need to also have the Standard Chartered BC credit card attached to their bank account with monthly spending over 500,000 won. This increases the points granted by the Reward W check card to 0.5 percent to spending between 300,000 won and 700,000 won, and 0.6 percent over 700,000 won.

“The Reward W check card and credit card provides not only reward points but also discounts in many places,” said Jang Ho-joon, executive vice president of Standard Chartered Bank Korea. “We will strive to analyze the consumer’s needs and patterns to provide services which can benefit people’s daily life.”

To celebrate the launch of the Reward W series, Standard Chartered is offering to give cardholders the value of the annual card fee back through various discounts. To receive this benefit, users need to apply for the card through either the mobile banking app or website by the end of June and spend more than 100,000 won in Korea for a month.